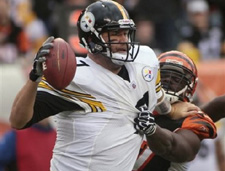 One day after he aggravated his fractured right thumb taking a snap in practice, QB Ben Roethlisberger participated in a full practice and pronounced his thumb “good enough.”

Like Woodley, he is listed as probable on the official injury report, but will play against the Bengals.

You can read more from Mr. Dulac at the PG+ site!

“I’m not sure what you would label us, I know that Ben is, he is the best player on our offense so certainly we would put the ball in his hands more often than not. It’s a good thing for our team and I think that’s kind of been maybe the biggest difference over the last few years.

“And there’s been games where he’s put us on his back and executed the game plan and has gotten wins for us, and he will continue to do that in the future.” — On whether the offensive personality of the Steelers has changed.


You can listen to the full interview here.


*Thank you to Trish from Heath-Miller.com!

From Teresa Varley, at the Steelers Official Site: 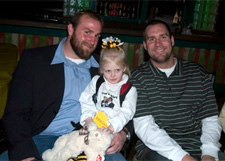 Earlier this week Brett Keisel was named the Steelers 2011 Walter Payton Man of the Year.

On Thursday night he proved why he is the recipient of the honor as he served as the honorary chairman for the Cystic Fibrosis 65 Roses Sports Auction, one of the many things he does in the community.

Keisel was joined at the event by many of his Steelers teammates, including James Farrior, Corbin Bryant, Casey Hampton, Cameron Heyward, Ziggy Hood, Heath Miller, and Ben Roethlisberger, signing autographs for the guests.


You can read more about the event from Ms. Varley here.

Most everyone agrees the 2011 MVP race narrows down to Aaron Rodgers and — well — Aaron Rodgers. But Cincinnati Bengals coach Marvin Lewis believes Steelers quarterback Ben Roethlisberger deserves to be in the discussion.

“He is totally the catalyst of their offense and their football team,” Lewis said Thursday, according to The Cincinnati Enquirer. “He makes (Chiefs linebacker) Derrick Johnson miss in the pocket last week and throws a perfect pass to a very well-covered tight end. He extends the play enough that the tight end was able to come open late, and he makes a perfect pass where only one guy can catch it. Those are things that maybe go unnoticed at times but are truly fine football plays.”

Roethlisberger’s numbers aren’t in the same stratosphere as Rodgers’, but the 29-year-old QB is quietly having another very productive season in what has been an underrated career. Through 11 games, Roethlisberger has thrown for 3,070 yards, 17 touchdowns and 10 interceptions. His 92.7 passer rating ranks him seventh in the league.


You can read more from Mr. Hanzus here.

Ben currently has the league’s second highest passer rating on play action passes, and is second only to Aaron Rodgers in passer rating.


You can check out the stats here.