Have you voted for your quarterback today?

Home/News/Have you voted for your quarterback today?
Previous Next

Have you voted for your quarterback today?

How about your center? Your safety? Your wide receivers? Your running backs? Your linebackers? Your defensive ends…. 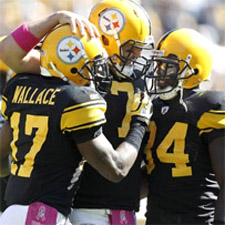 Pro Bowl voting doesn’t end until Monday, Dec. 19 at the conclusion of Monday Night Football (Pittsburgh Steelers at San Francisco 49ers, 8:30 p.m.)  so get your votes in and make them count!!

Being selected as a starter in the Pro Bowl is a huge honor for players! Let’s show our team how much we support their selection – vote early, vote often! Make Hawaii Black & Gold! And if they end up making Indianapolis Black & Gold instead, at least they’ll have earned the right to be called “Pro Bowlers” at the same time!!!

Ben has passed for 3,070 yards with 17 touchdowns and a quarterback rating of 92.2 rating so far this season! He is currently No. 2 in fan voting for AFC quarterback with 565,378 votes behind the Patriots’ Tom Brady with 873,424 votes. The Bills’ Ryan Fitzpatrick is third in AFC quarterback voting, and the Broncos’ Tim Tebow is fourth.

You can see the results for the Top Ten getters so far at Steelers Depot.