“It was so great that he signed both of my Grandchildren’s footballs. Thank you Ben for making my guys so happy.” — Francene Slampak


“Thank you for the autographs, my boys are at camp tonight from NC! Steeler proud!!” — Elaine White

“MY FAVORITE QB BIG BEN ON AND OFF THE FIELD.” — Betty Samuels


“Ben is the best ever for signing autographs. He really cares for the fans. He talks to the fans while he is signing, and that is rare. A really nice guy, and a great QB. — Carol Evans

THX @_BigBen7 THANKS FOR SIGNING MY DAUGHTERS FOOTBALL AT FRIDAY NIGHT PRACTICE YOU MADE OUR DAY & YOU ARE THE BEST. pic.twitter.com/ncNnswNiWH

QB Ben Roethlisberger of the #Steelers spending time with the standing room only crowd at Night Practice @WPXI pic.twitter.com/5zVmNx6xis 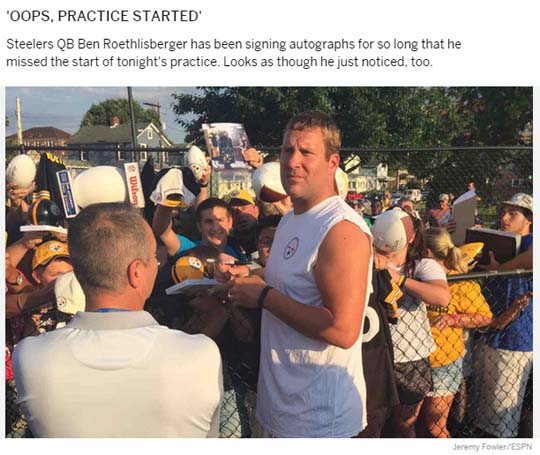 And finally on the field!

At Friday Night Lights & watching @_BigBen7 do what he does best #steelerstrainingcamp #BigBen pic.twitter.com/N4ajTDjcCx

Thank you to everyone who shared their photos & thoughts with us on social media tonight!!