From Ben this morning…

Home/News/From Ben this morning…
Previous Next

From Ben this morning…

Ben, Heath Miller and Brett Keisel pose in the Steelers locker room today just before they suited up for their roles as the Gotham Rogues in the movie, “The Dark Knight Rises”. 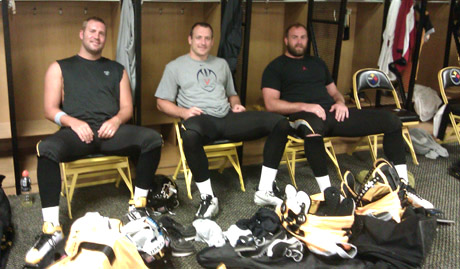 The home team Rogues, coached by Bill Cowher, will take on the Rapid City Monuments at Heinz Field, which has also been transformed for it’s role in the movie!


For a larger version of the photo, click here.

From Michael A. Fuoco, Pittsburgh Post-Gazette this afternoon:

Steeler Nation went Rogue this morning, as extras cheering for the new hometown team, the Gotham Rogues, for a scene being filmed for “The Dark Knight Rises” at Heinz Field.

The Rogues are playing the Rapid City Monuments in a fictional game at the stadium.

Decked out in the Rogues’ colors of black and gold, thousands of fans cheered as some Steelers, including Ben Roethlisberger and Hines Ward, appeared, playing members of the Rogues. Bill Cowher returned, prowling the sidelines in his first coaching gig since leaving the Steelers after the 2006 season. Kevin Colbert, the Steelers director of football operations, is reuniting with Cowher as an assistant coach for the Gotham Rogues.


You can read more from Mr. Fuoco here.


For more movie news, check out Friday’s post below!