Home/News/“Shhhh! All’s quiet on the Big Ben front”
Previous Next

“It’s kind of refreshing to come into camp to just, you know, focus on football and focus on what I want to do in this ‘second half’ of my career, if you will. It’s kind of a fun time right now.” — Ben, from the interview.

From an interview with Ed Bouchette in today’s edition of the Pittsburgh Post-Gazette: 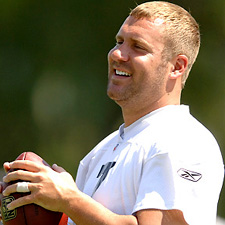 There is no news, and that is significant. The Steelers quarterback has been a hot newsroom topic for too many of his previous seven training camps in Latrobe, and it is a relief to him, his teammates and management that the storms have subsided, that every major news organization in America has not descended onto the tiny college campus to focus on Roethlisberger for a change.

“I know, it’s been nice,” Roethlisberger said during an interview with the Post-Gazette in a Saint Vincent dorm. “Walking off the field, normally they’re swarming me — and they’ve been swarming other people. It’s been very refreshing.”

He is 29 years old, married for two weeks and entering his eighth NFL season with the luxury of hearing more football questions these days than in previous training camps.

Roethlisberger has formed a bond with his linemen; many were in his wedding party. He sounded no alarms about a unit that, despite its critics, has played in two Super Bowls in the past three years.

“I think our line is as deep as it’s ever been,” Roethlisberger said. “We have guys who can bounce around to different spots. I just hope the guys can stay healthy because I don’t know when I had the same five guys to start and end the year.”


You can read the full interview/article here.