“We’ll chew this up. We’ve just got to make plays, and be accountable. Be disciplined….we need to get their quick.” — Ben, post-game.

With time running out, Roethlisberger made a call that the Cowboys weren’t expecting. The defense thought Roethlisberger was going to spike the ball, but instead he gave Antonio Brown a ‘look’ and threw a 15-yard touchdown pass to him.

The Steelers took a 30-29 lead at that point, but weren’t able to hold on.

“I called it. He (Brown) saw me call it,” said Roethlisberger. “Todd (Haley) was in my head yelling, ‘Don’t waste a down.’ But I knew what we were doing, so I’m glad it worked.” — Teresa Varley, Steelers.com recap.

“Steelers quarterback Ben Roethlisberger wasn’t letting his team lose. He just ran out of time. Roethlisberger — who publicly told teammates earlier in the week to “follow me” — walked calmly onto the field with his eyes fixated on a 75-yard, game-winning drive.

The Steelers used a bold strategy that set up the offense well: Let Elliott score a 14-yard touchdown with 1:55 left, giving Ben Roethlisberger the ball with two timeouts and a 29-24 deficit.

Missing three two-point conversions hurt the Steelers, but they regained an advantage by negating Dallas’ ability to milk the clock for a potential game-winning field goal.

Roethlisberger was brilliant in completing five straight passes, including a fake spike, Dan Marino style, to set up a lob pass to Antonio Brown over the top for a 15-yard score, catching Dallas sleeping with 42 seconds left. Roethlisberger threw for 191 yards in the fourth quarter alone….

Against the league’s hottest team, even a hot Big Ben wasn’t enough.

“Roethlisberger completed 37-of-46 for 408 yards, with three touchdowns, no interceptions, and a rating of 125.4 in a game the Steelers would end up losing, 35-30, to the Dallas Cowboys. And included in Roethlisberger’s numbers was a 5-for-5 for 75 yards and a touchdown on the fourth quarter possession that ended up giving the Steelers a 30-29 lead with 42 seconds remaining.” — Bob Labriola, Steelers.com.

“With his late-game, fake-spike TD, Ben Roethlisberger moved to 9th on the all-time TD passes list, ahead of Warren Moon & Johnny Unitas.” — ESPN via Twitter.

Regios de Acero traveled 51 hours from Mexico – and one broken-down bus later – arrived in Pittsburgh to be at Heinz Field to see the game. Even though their favorite team lost, the trip was certainly not a loss for them. Roger Saucedo sent this photo to us just before game time!

The Regios de Acero fan club was thrilled to be greeted with open arms by the Steelers organization! 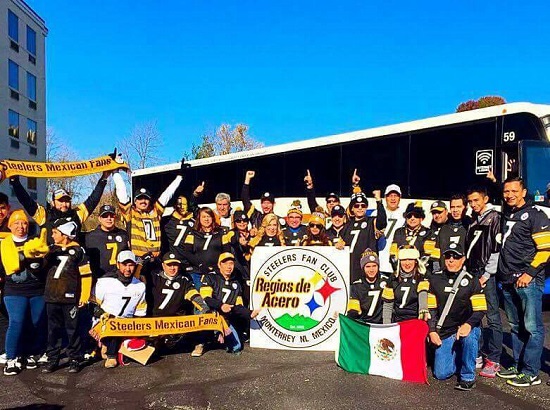 “All started thanks to Ben because you were the first to show who the Regios de Acero are to the Steelers and to SteelerNation worldwide! Thank you so much! ¡Muchísimas gracias!!” — Roger.

As for the game:

“A few minutes ago, on our way from Heinz Field to our transportation, we talked about the great effort that Ben showed until the last minute. We are proud of Ben, he shows to all that kind of leader he is! He’s a warrior fighting until the last minute. Thank you! That last touchdown was a great play!! We support Ben, no matter what because he fights all the game. Obviously, we want a Steelers win, but we feel proud the way the team, and Ben in special, played today.” — Roger.

Thank you all and safe travels home!! Hope to see you again next season!