Whitfield: A lot of Ben in Cam Newton

Home/News/Whitfield: A lot of Ben in Cam Newton
Previous Next

Whitfield: A lot of Ben in Cam Newton

From an article/interview by Albert Breer at NFL.com today: 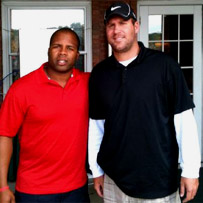 Some folks look at Cam Newton and see Vince Young or JaMarcus Russell, the former for his feet, the latter for his arm, and both for their size.

But George Whitfield, the man charged with preparing Newton for the 2011 NFL Draft, sees another quarterback he trained this year: Ben Roethlisberger.

“Roethlisberger is a more accurate portrayal of what Cam is than Daunte Culpepper or Vince Young. Those are just clichés, because it’s the big African-American guy,” said Whitfield, a quarterback specialist who worked Roethlisberger out during his suspension. “Physically, and style-wise, they’re giants. Ben’s over 6-foot-5, Cam’s 6-6, they’re both 250, they’re both agile, both can play off the script. Cam can make an awful lot of throws, just like Ben. They’re both as comfortable out of the pocket as they are in it.

“And they have that closing mentality….They both really have an understanding of how to close games.”

The Steelers’ quarterback isn’t Peyton Manning or Tom Brady, and that’s just fine with Pittsburgh. The idea for Newton is to find a team that’s similarly accepting of a different style that, in the end, can be every bit as effective, even if it doesn’t look as pretty.

And as much as Whitfield’s training Newton to do things a Brady or Manning would, he’s also trying to get the big man to accentuate his traits like Roethlisberger does. That means, in this case, Newton learning to use his feet not to break off the 60-yarder, but to create the type of scramble situation our executive described, which leads to the kind of big plays that are Roethlisberger’s trademark.