Ben spent much of September, 2010 working with quarterbacks coach George Whitfield.  Mr. Whitfield owns Whitfield Athletix in La Jolla, California and commuted each week to Pittsburgh from his home in San Diego to try and simulate a regular NFL practice week with Ben at a local high school. 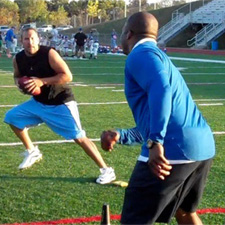 Of their first day together, Mr. Whitfield recalled: “I don’t know how many guys like to throw in the rain, but he did it in a steady, driving rain for two hours. To him, it was much more than just going through drills. He wanted to know: ‘What did you notice here? What do you have in mind for this drill?’ I learned how dedicated this guy is.”

Mr. Whitfield also worked with Cam Newton, the Heisman Trophy winner out of Auburn that was taken first overall by the Carolina Panthers last year. Most recently he has worked to hone the skills of Stanford’s Andrew Luck, who is preparing for his March 22nd Pro Day workout.

Now Mr. Whitfield has videos available of his training sessions with high school quarterbacks. You can see all six episodes here.


You can learn more information about Mr. Whitfield’s at his website.

You can check out photos of Ben’s workouts with Mr. Whitfield here.

A SHOUT OUT today to a special Big Ben fan! 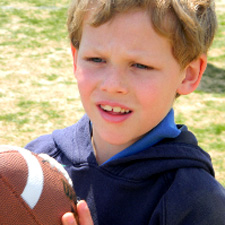 Seven-year old Alex Green has been fighting cancer. He had to undergo surgery at the age of five to remove masses as well as one of his kidneys, and then went through a combination of chemotherapy and radiation treatments. He was officially in remission two summer’s ago.

However during a recent check-up doctors found another mass.

During the surgery just two weeks ago, there were complications, including a tear in his aorta resulting in a loss of blood as well as paralysis.

Alex has a long road ahead. Please keep him in your thoughts and prayers!

If you would like to visit his page, and leave him your own Steeler Nation “shout out”, you can do so here.