“It’s an awesome honor! Shoot, a storied franchise and he’s The Guy, the face of this. I know there’s a lot of ’70s Steelers, but, when you’re talking about quarterbacks and offense and stuff, he’s the guy. To have an opportunity to break another record – and this one is a pretty big one.” — Ben, after practice yesterday, talking about the record.

From ESPN‘s Jamison Hensley this afternoon:

Elias Sports Bureau overturned the home team’s statisticians on Wednesday, making Rashard Mendenhall’s 13-yard touchdown a catch instead of a run. The ruling on Sunday was a run because it looked like it was a lateral.

Instead of trailing Terry Bradshaw by 300 yards, Roethlisberger only needs 287 yards Thursday night in Tennessee to become the Steelers’ all-time leading passer. Quarterbacks have averaged 284.4 yards passing against the Titans this year.

A special Shout Out to a special little boy! 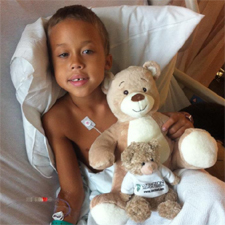 This story comes to us from Cristalena Potvin – My friend’s little boy, Richard Culliver, a student at White Knoll Elementary in West Columbia, South Carolina was walking “funny” last Wednesday, so she decided to take him to the doctor. Richard was immediately admitted into the hospital for an MRI. Two hours later, the MRI discovered a tennis ball-size tumor in the middle of his brain that is inoperable. It is called, diffuse intrinsic pontine glioma. He was sent home today so that he can make the most of his life.

Richard’s absolute dream is to go to a Steelers game and Augusta SteelMasters, a Steelers fan club in Augusta, Georgia are making that dream come true! They purchased tickets for both Richard and his dad Brian to attend the game this Thursday in Tennessee.

Richard is beside himself and can’t believe he is getting the opportunity to go! His dad and stepmom already took him out to get him outfitted with Steelers gear and they are ready to cheer on their favorite team tomorrow night!

Steeler Nation, please keep this little Steelers fan and his parents, Stephanie McMillan and Brian and Terra Culliver in your thoughts and prayers!


*Thank you Cristalena for sending this story, and thank you to the fans at Augusta SteelMasters for making Richard’s dream come true!

Cristalena is doing a fundraiser with her business – every dollar raised by purchases will be matched by her and given to the family. You can view her site here.

The Augusta SteelMasters fan club is also doing a donation drive here. You can also check out their Facebook page here.