Gunslinger ‘artist’: The risk and reward of Ben Roethlisberger

Home/News/Gunslinger ‘artist’: The risk and reward of Ben Roethlisberger
Previous Next

Gunslinger ‘artist’: The risk and reward of Ben Roethlisberger

“That’s a tough kid. I don’t know if he gets enough credit for all the things that he does. Runs when he has to, stands in the pocket, gives his receivers time, makes throws under pressure, people hanging on him, consistently the target every defense tries to attack. … He doesn’t give you many chances [for interceptions]. He uses the tight ends, the backs as well as the receivers. He’s got a lot of options. Makes a lot of good decisions on getting the ball to who has the best opportunity in space in coverage or the best matchup.” — Patriots coach Bill Belichick. 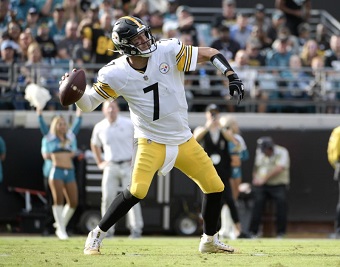 Very few humans can shuffle frantically to the left to avoid a sack and rip a fastball 45 yards between two Los Angeles Chargers defenders for an Antonio Brown touchdown the way Ben Roethlisberger did in Week 13.

Pittsburgh Steelers offensive coordinator Randy Fichtner had that play fresh in his mind as he described the eye-popping — and sometimes head-scratching — duality of Roethlisberger’s confidence as a thrower.

As the Steelers try to strengthen their playoff hopes with a win over the New England Patriots on Sunday, they will place the football in the hands of a quarterback who wins, dazzles and throws interceptions like few others.

In a new era of NFL passers that features human rifles (Patrick Mahomes), RPO wizards (Deshaun Watson) and other 7-on-7 disciples, Roethlisberger might be the last true extension of Brett Favre, whose penchant for picks and big plays embodied the throwback “gunslinger” mantra.


“I’m a quarterback that is going to go out and sling it. You talk about gunslinger or whatever you want to talk about. I’m not going to worry about interceptions. I hate doing them. They bother me. But I’m going to go out and play my game and try to help us win football games.” — Roethlisberger, on his weekly radio show in November.

Two different coaches interviewed for this story brought up the Favre comparison unprompted. One’s a Hall of Famer, the other will surely become one after retirement.

This season, Roethlisberger ranks tied for second among NFL quarterbacks with 13 interceptions in 13 games, but he also leads in passing attempts with 546 and is second in yards with 4,227.

The interceptions aren’t such a bad thing when viewed through the prism of pure production and wins.

Only Tom Brady (45) and Newton (38) have more regular-season wins than Roethlisberger (37) since 2015. Russell Wilson is tied with Roethlisberger in wins but has played in seven more games. Drew Brees is right behind them with 36.

The way Fichtner sees it, Roethlisberger just needs a bigger canvas than most.

“Some quarterbacks are scientists. Some are artists. Ben is an artist,” Fichtner said. “He’s going to create.”

Sometimes, Roethlisberger will tell Fichtner that he needs a minute to cool down on the sidelines after a pick, but his longtime coach usually lurks because he wants his quarterback to know he’s with him.


“The ones that [can make his throws], you know their names — [Aaron] Rodgers, [Tom] Brady, [Drew] Brees. We’re talking about the best players in the game. Then sometimes you just say, ‘Wow, c’mon Ben. You can’t make that play every time.’ And sometimes it bites you. And I think he’s able to stand up after 15 years and being a leader of this team and caring, I think he’s able to stand up and say, ‘My bad.’ That’s a part of the game, too. I’m not afraid to say it. I don’t think he’s afraid to say it. That’s kind of what we’re hoping to develop amongst our group, that if I make a mistake, they make a mistake, hey, I’ll own up to it to my buddies, my teammates, and I’ll try not to make that mistake again.” — Randy Fichtner.

The interceptions haven’t affected Roethlisberger’s large presence on opponents’ scouting reports. One NFC defensive coordinator who faced Roethlisberger this season said Big Ben is still one of a small group of quarterbacks who are guaranteed to prolong your Sunday.

Attacking Roethlisberger with a three-man rush is futile, the coordinator said, and the numbers bear that out. Roethlisberger has 24 touchdown passes against three rushers or fewer since 2013, most in the NFL, according to ESPN Stats & Information.

“Sometimes you have to make a decision to throw it in there. I like the quarterbacks who do,” the coordinator said. “He’s patient enough to go through his progressions, and he’ll stand in the pocket for as long as it takes. That’s part of why he’s so good. He’ll take chances other guys may not. And sometimes he loses. But he wins more than he loses. He’s like a Favre in that way.”

Tight end Vance McDonald feels a connection with Roethlisberger because he’s not safe.

“You see methodical quarterbacks who enjoy the checkdowns,” McDonald said. “To each his own, but at the same time, Ben is who Ben is because of how he’s played and the decisions he’s made. You never want Ben to be anyone else.