Recap from the Steelers’ Teresa Varley: 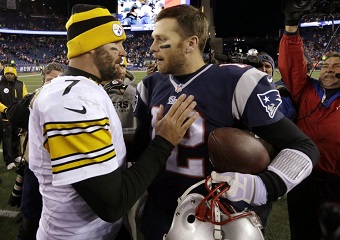 After losing the last three games, the Steelers still hold on to first place in the AFC North at 7-5-1, with Baltimore breathing down their necks with a 7-6 record. Winning out is key, and it all begins this week against the Patriots at Heinz Field.

The Patriots have won the last five meetings against the Steelers, and nine of the last 12 since Roethlisberger was drafted in 2004.

“The Patriots are one of the best teams for a reason. We are not the only team that has issues with them,” said Roethlisberger. “They’re that good. The past is the past, we can only focus on this week.”

The struggles of the last three weeks are something that Roethlisberger admits is frustrating, especially after riding a six-game win streak previously.

“It’s very frustrating. You want to win them all, but you understand you can’t,” said Roethlisberger. “We can only control this week. We have had opportunities. We just for whatever reason haven’t found a way to do it. I don’t think it’s from a lack of sense of urgency. It could be lack of execution, lack of one thing here or there. We understand what it takes to get it done. We just have to do it.

“We realize what’s at stake. Not panic. It’s not going to get any easier.”

“I think it’s understanding what we need to do, facing adversity in the face and just getting ready for one of the biggest challenges we have had all year.”


You can watch Ben’s interview here.

You can read more from Ms. Varley here.