…who are just as happy as he is to pose with his autographed Nike from Big Ben!


We shared the story of Mike Artz on May 14th, thanks to his long-time friend Kent:


“I wanted to do something special for a personal friend of mine – we live in Wisconsin, and my friend, Mike Arntz is a lifelong Steeler fan – pretty tough to do in the land of Cheeseheads (see his pontoon boat). Below is the story describing what he did, donating 70% of his liver for his ailing nephew. In my eyes, Mike is a hero.” – Dr. Kent Vandehaar, Chippewa Falls, WI

Mike donated that 70 percent of his liver to his 22-year-old nephew Tyler, who has struggled with a rare liver disease for much of his life.

“I was amazed that he was willing to do this for me,” Tyler said.

“I really never had any hesitation about the whole thing,” he said, recalling that he knew it was the right thing to do and imagined the regret he would have felt if he found out later he was a match and anything happened to Tyler while awaiting a deceased donor liver.

His friend Kent said that Mike is one of the nicest people you will ever meet and, “a true living hero in my eyes.”

We had to agree with Kent. Mike makes Steeler Nation proud!


So what do you send to a BIG Big Ben fan like Mike, who finds himself surrounded by Packers fans, all of whom just want to do something nice for their friend? 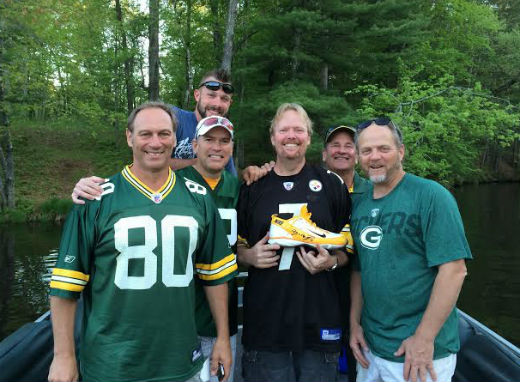 
“We gave Mike his shoe – we set it up as a visit from some of his racquetball buddies – we all showed up in our Packer stuff and cruised around the lake in his Steelers pontoon. I’m the one in the white hat. He was in awe at the present! Thanks to Ben for bringing awareness to organ donation!” — Kent

“Ben, I just want to thank you so very much for all you have done! My friend Kent Vandehaar contacted you and let you know about my being a HUGE Steelers & Ben fan and you posted pictures of me on my Steeler pontoon as well as the article about donating my liver to my nephew. Then to top it off, a SHOE FROM BIG BEN!!!! Unbelievable!! That is so cool! The gift from you as well as the gift from my friend Kent were way above and beyond what I would have ever believed! Thank you once again. Life is awesome! GO STEELERS!!!!” — Mike

Kent, thank you for alerting us to this great story…and Mike, you are a true hero!