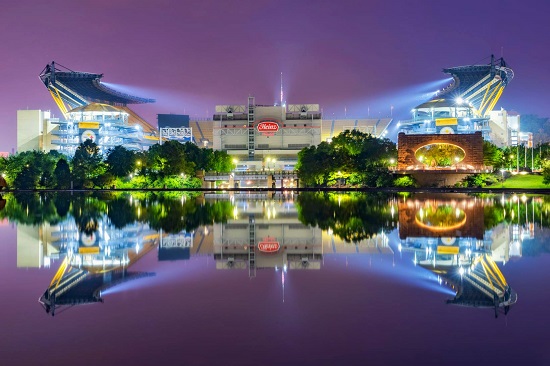 And what better way to start the week than with this beautiful shot of Heinz Field from our friend, Dave DiCello?!

If you’ve been following my page for at least a year, then you probably saw the images of Heinz Field that I shared last fall. Two of my favorites, from a perspective that I hadn’t really seen (I’ll get back to that in a minute). Well, I went back to shoot a version with non-fall colors this morning, and had planned to wait until closer to the Steelers opener, but I just can’t wait that long.

Flashback to last fall. I was shooting the fountain one morning, looking for a different way to capture Heinz Field. What I DIDN’T want to do, was shoot it reflecting in the river (it’s been done 100 times by everyone) or in the center of the fountain (has also been done, and there are huge pipes that stick out of the water). It had rained the night before, so the fountain was exceptionally high (just like it did yesterday), and I noticed that on the city side there was enough of an opening in the water to get the entire stadium. Perfectly still. No pipes, no ripples in the river…just the stadium. It ended up being one of my most popular images of the year.

So I went back to capture it again yesterday, without the fall colors. But the fountain was at its ‘normal’ level, which meant you’d see the fountain’s edge. But after all the rain, the fountain was more than full to give that ‘infinity pool’ look, exactly what I was going for. And it was one of those times when the shot I had in my head translated exactly to what I captured.— Dave.

You can always stop by Dave’s website to enjoy more of his beautiful photography!