‘Having fun starts with Ben’

‘Having fun starts with Ben’ 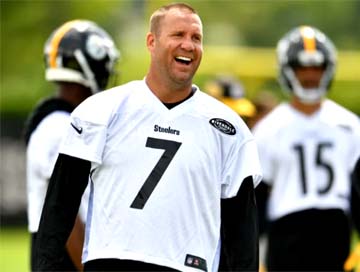 As they walked off the field on Thursday at the UPMC Rooney Sports Complex, players were all smiles as they were headed into a five-week break until they report to Saint Vincent College for training camp. There were hugs and handshakes, high-fives and true brotherhood. There were laughs and a lot of energy and positivity as players were saying some goodbyes for the short break.

Minicamp was officially in the books and it was time for a little R&R as well as preparation for what is to come in camp.

It was nothing unusual, nothing outrageously different from the past. Yet, there was something different. And it’s because the past month, the OTAs that were voluntary that drew almost perfect attendance and the minicamp that did get a full turnout, were fun for the players.

Yes, fun was the word.

“The biggest thing is the fun we are bringing back to it,” said Vance McDonald. “It’s so hard to describe. It starts with Ben (Roethlisberger) and trickles down. I think our approach this year is we are keeping the level of intensity and drive that it takes to be able to build that foundation, the one it takes to win a championship. But we are having fun too. It’s good. I think guys are playing a lot looser and free.

“You have to play in that fine line of that and being super loose. It’s been fun. Our approach this offseason, we weren’t winning or losing games right now, but we were putting in the work to win and having fun doing it. It’s key for sure.”

The fun has been on the field, on days when they were out there sweating, and on days when veterans got a break and helped the younger guys, coaching them up some and giving them encouragement.

“I think it was important guys wanted to get back to football,” said Roethlisberger, who admitted the time leading into OTAs and minicamp was tough on his family with all of the outside talk and criticism unfairly aimed at him. “We had been away from it for a while. You hear the outside world trying to tear us apart and it brings us back together.

“Once we were back here at the facility, everyone was excited to get going. We got rid of the outside distractions. Everyone was ready for football and enjoyed it.”

The fun has also been off the field, from a team building session at Topgolf, to an offensive getaway at Roethlisberger’s home in Georgia.

“With Ben taking the initiative to take us all to Georgia, that was the start of something new,” said James Conner. “We saw a different side of him. We all enjoyed that trip very much.”

“The biggest thing is we moved past everything that went on quickly and gelled together,” said Xavier Grimble. “Guys are happy to be around. We know the pressure is on us, people are going to consider us underdogs. We like that. We understand that. It brought us together.