Home/News/Honoring our four-legged protectors!
Previous Next 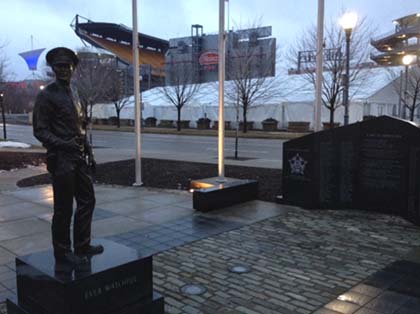 The Memorial to these brave men and women stands on the North Shore of Pittsburgh, just outside of Heinz Field.

But the LEOM realized that there was one important law enforcement member that was not honored – something that came to light after the line-of-duty death of K-9 Officer “Rocco” in January.

In fact, there have been four Police K-9’s in Allegheny County who have been killed in the line of duty:


“When the original Memorial was designed we did not include a K-9 partner for our officer. That was short-sighted of us. Our K-9 partners are part of our Law Enforcement Family. They live and work with their partners, and serve as members of our Police Departments.

“I truly believe that the K-9 Officers work for the praise and love of their human partners. They are fearless in their actions and protective of their partners to a fault.” — Cmdr. Donna Best, President of the Law Enforcement Officer Memorial.

The LEOM is working with the City of Pittsburgh Department of Art and the Sports and Exhibition Authority to have the addition of a K-9 partner added to the existing memorial on the North Shore.

They are working with local artist Susan Wagner to design a K-9 statue to add to the Memorial. Susan designed the original statue of the officer named, “Ever Watchful” (photo above). 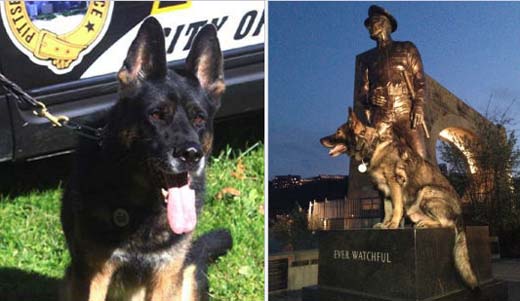 Their hope is to have it completed by early next August for the 100th Anniversary of the Fraternal Order of Police (FOP) National Conference which will be held in Pittsburgh.

But they need your help in bringing to fruition the addition of a K-9 Officer to the existing Memorial!

You can make your check or money order payable to LEOM K-9 Memorial and send your tax deductible donation to:

Please join with Ben in helping them honor our brave K-9’s who gave their lives in the line of duty.

You are also welcome to attend a fundraiser this month that will benefit the K-9 Memorial!

On July 30th at the River’s Club in downtown Pittsburgh, Jazz musician Jessica Lee is helping with a Fund Raising Happy Hour.

The event kicks off at 5:30pm. Enjoy music from Jessica, guitarist Mark Strickland, bassist Dave Pellow, and Jay Willis on sax until 8:00pm. The event will also feature a Q&A with artist Susan Wagner, who will also have a painting of a K-9 officer on display.

There is a $5 cover charge at the door.

You can get more info here!


*The Law Enforcement Officers Memorial is a 501(c)(3) Non-Profit Organization.