…go out to two of our Steeler Nation families!


In July of 2012, Julia Pollock was delighted to receive a personal video message from Ben. Julia had been battling breast cancer since 2010, which had then spread to her spine and brain. She had been in the hospital for 52 days when she received the surprise message:


“I want Ben to know that his video email meant the world to me not just because I bleed black and gold and watching him every Sunday makes my week but because I’ve ALWAYS known him to be a man with a good heart.” — Julia, July of 2012.

Her father, Alan Nagy, asked us to share his email with all those that had been praying for her: 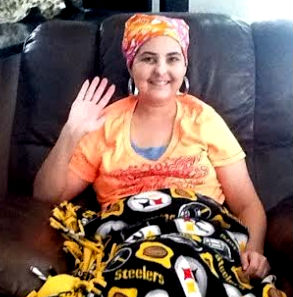 “My daughter Julia developed cancer two years ago and was given 3 to 6 month to live, while Julia was in the hospital she received a personal video from Ben giving her words of encouragement, she cherished that video and when she was having a rough day she would watch that video and it would always bring a smile to her face, and as parents we were so grateful for that but I’m saddened to say that Denver’s #1 Steeler’s Fan has lost her battle with cancer. Julia passed away on Saturday the 14th [of June], after betting all the odds for her prognosis, and survived two years longer then the Doctors expected. Our daughter Julia was such a sweet and loving person, she touched the hearts of many.

“She will be missed by all who knew her and loved her. This up-coming season will be very hard without her, but when the new season start, I will still see my beautiful daughter Julia in spirit, jumping up and down cheering for her beloved Steelers, so Steeler Nation know that a true Steeler fan in Denver may be gone, but her memory and love for her Steelers will continue for seasons to come. We will miss her so much.”

In February of 2013, Tyler Hallsey was diagnosed with Pontine Glioma – a tumor surrounding the brain stem. On September 3rd of 2013, his father shared his story and photos with us after Tyler had the opportunity to attend a Steelers pre-season game with his family, courtesy of former Steeler and current ESPN analyst Merril Hoge: 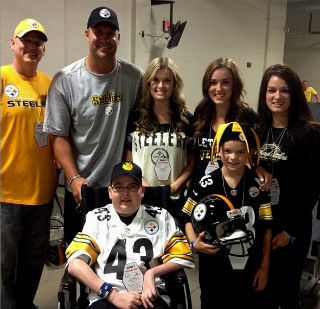 “When Tyler found out about his diagnosis he was scared and confused. We all were. My wife left the room to call her parents and give them the news.

While she was out, Tyler and I talked about the road ahead and that it would be hard.

We both made promises to each other, then I asked him what he thought we should do. He looked me in the eyes and said, ‘Whatever it takes’.

I think Chuck Noll would be proud.

Since that day in February we have been Team Whatever It Takes.” — Chris Hallsey


Chris shared his own thoughts with us once again on November 13, 2013 in an update for those that had been asking about his son.


“My heart lies at my feet in a million broken pieces. Pieces that will never fit together again.” — Chris Hallsey, from his son’s support page on Facebook.