In memory of a young fan

Home/News/In memory of a young fan
Previous Next

In memory of a young fan 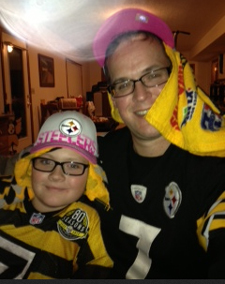 On December 30, 2012, my son passed away in his sleep after a day of skiing at Hidden Valley Ski Resort. It was highly ironic that he died there as we had gone there as a refuge during his mother’s two-year battle with breast cancer. My wife, daughter, son, and I went there twice in the winter when chemo went badly, and twice in the summer when chemo went badly again.

In the winter, we would watch our beloved Steelers and usually wear Steelers jerseys while skiing. In the summer, we would head to training camp.

My wife lost her battle on June 15, 2008. My son Connor watched SB XLIII with me after my wife died, and cheered wildly after the miraculous pass to Santonio Holmes. It was a sign that we could live and have fun again.

We continued these family traditions. The Steelers helped us heal, and after two years of low grade depression, my son had reached a place in the last couple of years where he enjoyed life again.

Ben was his favorite player.

Our last week was terrific, and the last two days of his life my son wore his Steelers jerseys proudly. He wore his Big Ben “bumblebee” jersey on December 28th and wore his Lamarr Woodley jersey that we bought at camp this year when we skied and last ate together on December 29. I will treasure those pictures and memories forever. I intend to frame the bumblebee jersey. He obviously had a number of jerseys but he loved that Ben “bumblebee” one the most. His classmates made cards for him – about half depicted him in that jersey. He was a special little boy. There are not many 11-year olds that warrant 3/4 of a page- even in a local paper. I miss him greatly. 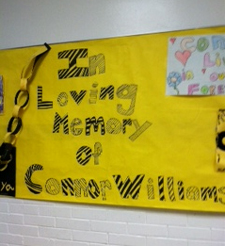 My son was a straight A student, and was destined for great things. My daughter and I are once again left with a great void in our lives. We hope to continue our traditions and hope our favorite team can once again help us heal.

I am an Assistant Prosecutor in New Philadelphia, Ohio. I grew up in Pittsburgh and have loved the Steelers since my youth. Though my kids are native Ohioans, they were properly indoctrinated. I will miss my son’s company greatly at training camp this year and while watching the games but believe he will be with us in spirit.

Thank you again Ben for helping us to heal before. It is a tougher journey this time. — With a heavy heart, Patrick Williams


You can see another photo of Connor in that Ben “bumblebee” jersey, and read a beautiful poem, written by his father here.


Thank you to Mr. Williams. Thoughts and prayers continue for you and your daughter, Kathleen.