“It was such an awesome honor to go to Miami”

“It was such an awesome honor to go to Miami”

“To be in the Hall of Fame, it’s not just me, it’s the unbelievable teammates I had that helped me along the way. We may not have the most NFL players from the MAC, but some of the best ones that have played the game have come from the MAC and I am proud of that. I am proud to say I am from the MAC, from Miami.” — Ben 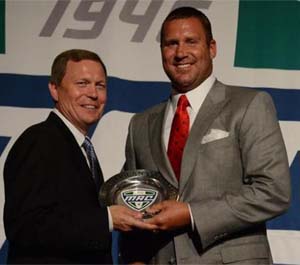 Quarterback Ben Roethlisberger took part in Steelers OTAs on Wednesday, then headed to Cleveland where he was inducted into the Mid-American Conference Hall of Fame as a part of the 2015 Induction Class.

Roethlisberger, who went to Miami University, is one of five individuals who received the honor at the Cleveland Renaissance Hotel.

“We may be a small school, a small conference, but guys can make it and win Super Bowls, win championships. It’s such an awesome honor,” he said. “I couldn’t have done it without my coaches and teammates and I owe them a lot.”

Roethlisberger, the Steelers 1st round draft pick in 2004, completed 854 of 1,304 pass attempts for 10,829 yards and 84 touchdowns in his three seasons at Miami. His junior year, a season he said he will always remember, he threw for 4,486 yards and 37 touchdowns en route to a MAC Championship and GMAC Bowl victory.

Roethlisberger was back at the Steelers practice facility on Thursday morning for the team’s next OTA session, something he .

“I had some friends come over and be with us for the event last night and I wanted to stay,” said Roethlisberger. “But it was important for me to be back here today with my teammates. If I can be here as much as I can it’s important to me.”