The Pittsburgh Post-Gazette‘s Ron Cook filled in on 93-7 The Fan this morning and had the opportunity to interview HOF quarterback Joe Namath. 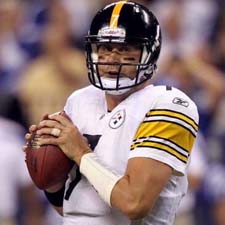 Among the topics discussed were the New York Jets and his concerns about their offensive line, his Super Bowl III win, and his opinion on the top tier quarterbacks in the league right now:

“There are several guys that are terrific man, including Ben Roethlisberger.  It is a team game and if you don’t have the team you are not going to perform as well as you probably could…

“You guys all know the top 5, 6, 7 quarterbacks and they have good teams to work with – Brady, Manning, Rogers, Rivers, Brees, Roethlisberger. That is the cream of the crop right there.”

“Sensational! Sensational! Anyone, any football person certainly would love to have him as part of their organization. I don’t have enough good things to say about Ben Roethlisberger as a football player and a leader out on that football field as well. I’ll take Ben on my side every day of the week.”


You can listen to Mr. Namath’s interview here.

Highlights from Ben’s meeting with the media 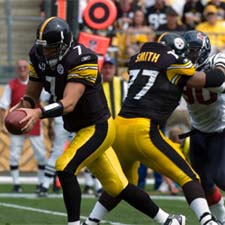 On the offensive line replacements –

“The Houston media – I just got done talking to them and they asked me how I have confidence in guys we ‘pull off the street’. I was trying to figure out who we pulled off the street. Those are guys I’ve known for a long time and have been here for a long time. I have all of the confidence in the world in those guys that they will step up for whoever they need to step up for. To me that’s what’s so impressive. Last week Trai played right tackle, he played left tackle, he probably played guard at some point. Those guys can do it and it’s awesome to watch.”


On the question of cohesiveness –


On the state of readiness for the offensive line –

“We’ll be ready. I’ve always thought that this offense…the sky is the limit for us. We just gotta get on the plane.”


On the secret to getting the running game going –

“I don’t know. That question has been asked a lot. I’m not the run-game guru (smiles). I am not sure what it is. I don’t know if it’s blocking better, longer, running…honestly I don’t know.”


On plans to get the passes out quicker:

“I don’t know if that was the plan last week. I don’t think you want to sit there and hold it forever. We had a lot play actions and boot type stuff in the game plan. We utilize the deep one to Mike, it took a little while. I don’t know if we got away from any type of game plan.”


You can hear more from his interview here.