Ben made his first NFL start! 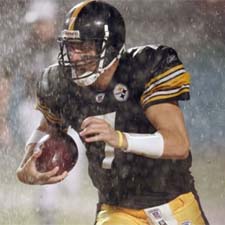 On September 26, 2004, Ben and the Steelers played the Miami Dolphins in Miami during Hurricane Jeanne, which was labeled the “deadliest hurricane of the 2004 Atlantic hurricane season” as well as the 13th costliest hurricane in U.S. history.

Officials decided on the Saturday before the game to push the starting time back 7-1/2 hours to avoid the hurricane, but the game still caught the outer bands of the storm.

The driving rain left standing water on the field, which made footing especially treacherous. The start of the second half was delayed so the grounds crew could apply additional bags of dirt.

“That was the worst weather I ever played in,” Hines Ward said.


To commemorate Ben’s memorable first NFL regular-season start, we are having a contest….

The 26th emailer with the correct answers to “Ben’s firsts” will win an autographed 8×10 photo of Ben from that game (the photo above)!

The questions (all related to the regular season):


However, before you email, please follow these two rules:

1. Emails for the contest WILL NOT be accepted until 12 NOON ET and after (this gives fans in different time zones a chance to participate). If you email before that time, your email will be discounted.

2. Please, just one email per email address only (subsequent emails from the same address will be discounted).


A winner will be announced on this post later this afternoon. The winner will also be notified by email.


You can read more about that September game here.


*Thank you to fan contributor Keith F. for the contest questions!

UPDATE: We have a WINNER!

Congratulations to Calvin Coleman of Dwight, Illinois! He was our 26th emailer with all the correct answers:

(The dates were not part of the contest)


**Thank you to everyone who participated! There will be more contests throughout the season!