Home/News/Jogging….just a little jogging!
Previous Next 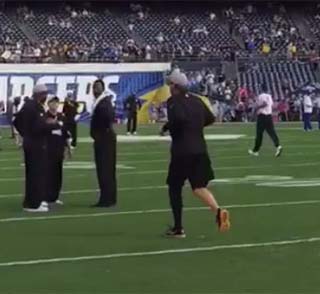 Ben Roethlisberger jogged off the practice field Thursday, guard Ramon Foster confirmed, another sign that the Steelers quarterback is progressing well from a sprained left MCL and a bone bruise.

No, he’s not ready to play this week. He was observing practice in casual clothes.

Teammates even teased Roethlisberger about the job, saying “Don’t do that, 7,” Foster recalled.

Early reports called for a late-October or early-November return to action.

But Roethlisberger hasn’t had any setbacks since hurting the knee 11 days ago in St. Louis. And quarterback Michael Vick said it was “absolutely” good to see Roethlisberger tossing the ball around at practice.

Roethlisberger said this week on Pittsburgh 93.7 The Fan that team doctors are pleased with his rehab but he’s not setting a timetable for return. It’s truly week to week, he said.

In 11 quarters this season, Roethlisberger has thrown for 912 yards, four touchdowns and two interceptions while completing 75.3 percent of his passes.

And a bit of fun after the jog…


Kevin Seifert @SeifertESPN
Well done, Ben Roethlisberger. Having fun with reports he had a cell phone on sideline during Steelers’ last game.

From Jeremy Fowler of ESPN.com once again: 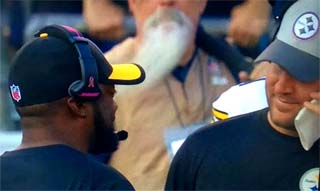 Pittsburgh Steelers quarterback Ben Roethlisberger was in a joking mood Monday night inside Qualcomm Stadium, holding his play sheet to his ear as a nod to reports he had a cell phone on the sideline last week against Baltimore.

The NFL investigated the matter and determined Roethlisberger was holding his wristband play sheet, which is the size of a smartphone. NBC cameras showed footage of Roethlisberger glancing at the play sheet, then stuffing it back into his sweatshirt.

Oh…did we mention the Steelers won 24-20 on the road against the Chargers on Monday Night Football?

You can read all about it right here!