Home/News/JuJu: I’d rather play with Big Ben
Previous Next

From Caio Miari at The Score: 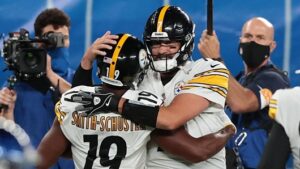 Playing one more year with quarterback Ben Roethlisberger was key for wide receiver JuJu Smith-Schuster when he decided to re-sign with the Pittsburgh Steelers this offseason.

Though Smith-Schuster could’ve joined Patrick Mahomes on the Kansas City Chiefs or Lamar Jackson on the Baltimore Ravens, the wideout felt that staying with Roethlisberger and the Steelers was the right thing to do.

“He had a huge impact,” Smith-Schuster said of Roethlisberger during an NFL Network interview. “… What he’s done for me for the past four years, I appreciate everything”

“To have one more year with him and bet on myself, I’d rather play with him than the other options I had,” he continued. “It’s nothing against those other guys – those are all great guys and they’re going to have a great career. … But you just don’t go back on your guys, and (Ben is) a guy I like to stay with.”

In March, Roethlisberger took a pay cut to return to Pittsburgh for his 18th season, while Smith-Schuster inked a team-friendly one-year contract with the Steelers worth $8 million.

The Ravens reportedly offered the pass-catcher a deal worth up to $13 million, while the Chiefs were willing to give him an $8-million contract that included $3 million in incentives. Kansas City head coach Andy Reid also used his Super Bowl LIV trophy in an attempt to lure Smith-Schuster, sending pictures of it to the wideout.


You can read more from The Score here.