Ben’s Youth Camp is up and running!

Home/News/Ben’s Youth Camp is up and running!
Previous Next

Ben’s Youth Camp is up and running!

“Today was absolutely amazing. Ben was SO involved with the kids and he didn’t rush anyone through anything. The main “MC/Coach” running it was awesome. He did such an amazing job. Can’t wait until tomorrow. My son Tommy, was so excited to catch Ben’s pass to him!!!! I could go on and on…..it’s just put together that well!!! Thanks to all involved!!” — Michele Rodi, to the website this evening. 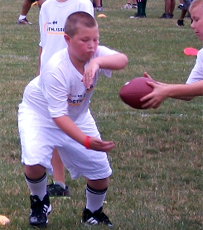 School is out for the summer, but some local kids spent the day learning all about football from one of the best in the business.

There was a lot of energy out on the field as 500 kids took part in the Ben Roethlisberger Football Camp.

Big Ben made the rounds to help divide the young athletes into teams.

“I’ve always had a spot in my heart for the kids and to see the joy on their face when they’re throwing a pass to get a completion and get a high five. It’s just awesome to me,” Roethlisberger said.


“Had a blast at Bens football camp! These kids are hilarious. One kid caught a long ball from Ben and all the parents had to do jumping jacks!” – Brett Keisel, Camp Assistant via Twitter.

You can check out the Day 1 photos sent in by parents and grandparents here. And a few more of Da Beard here.

That’s Jonathan Porter above, Ben’s Camp Contest winner, honing in on his running back skills!