Home/News/Last day of OTAs
Previous Next

Ben stopped to answer questions from the many media members today at Heinz Field as the team completed their final day of organized team activities: 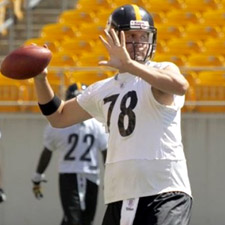 
Once again, Ben was asked about the new playbook –

“We’ve definitely made strides. They may not be giant strides, but they’re strides forward. I don’t think we’ve taken any backward. That’s the key — and it’s just OTAs right now. It will come next week for mini-camp.”


Ben also talked about rookies David DeCastro and Mike Adams, both of whom have missed OTAs because of their academic schedules –

“I hate to talk about rookies, because I don’t want them to get a big head (laughs). I’ve heard so many great things about both of them. so we’ll see what it’s like having them in person.”

You can watch/listen to Ben’s full interview with the media here.