“Let’s not forget, Ben Roethlisberger is still a Steeler”

Home/News/“Let’s not forget, Ben Roethlisberger is still a Steeler”
Previous Next

“Let’s not forget, Ben Roethlisberger is still a Steeler” 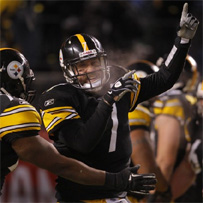 It’s become popular to write off the Steelers in the 2012 season even before they report to training camp Wednesday in Latrobe. ESPN analysts have said the window is closing quickly for the current players. SI.com says this could be the year the team takes a big step back. Others are saying much worse.

Concerns are everywhere, according to the critics. A new offense and new offensive coordinator. A young offensive line that could start two rookies, a second-year man and a third-year pro. A new featured running back. An old defense. A serious void in leadership.

The Baltimore Ravens beat the Steelers twice last season. Why can’t they do it again? The Cincinnati Bengals made the playoffs last season behind a rookie quarterback. They will be better.

I just have one question.

Does Ben Roethlisberger still play for the Steelers?

No window is closing.