Looking ahead to this Sunday

Home/News/Looking ahead to this Sunday
Previous Next

Looking ahead to this Sunday

The perspective from the other camp…. 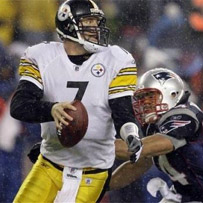 Now come the Steelers, the true model of excellence in both the short and long of NFL history. Pittsburgh has won six Super Bowls, more than any other club, including an unmatched two in the last five years. The Steelers are — as usual — tough, physical, talented, and well-coached.

A win at Pittsburgh would do more than merely put the Patriots back on track. It would further legitimize their place as top-tier team this season and put them in control of their own destiny.

From Coach Belichick’s conference call Tuesday with the Boston media:

Belichick said you could pick out any game Roethlisberger has played this season, and pick one out from ‘09, ‘08 and so on, and not know the difference.

”Ben looks like Ben,” Belichick said. ”He’s got a great style of play. He’s a very physical guy, hard to tackle, hard to get down, makes a lot of big plays downfield, uses all of his receivers. You’ve got to defend all of them, the tight ends, the backs, (Hines) Ward, Randel El . . . he uses all of them, and he’s a big threat back there to buy time in the pocket or pull it down and run.”

You can read the rest of his comments (though few) here.

From Coach Belichick’s press conference on Wednesday, posted at WEEI.com:

Do the refs give Roethlisberger a little more leeway in the grass because he is so tough to take down?

Coach Belichick: “Well, I think it’s the official’s judgment when he actually is in the grass. It’s a tough call, because a lot of times, he’s not down until he is actually in the dirt, and that’s hard to do. He’s a strong guy. He can stand in there. You see a lot of plays where he throws the ball with guys hanging on him, hanging on his jersey and his leg and around his waist and everything else [and] he can still rear back there and throw it. So what’s in the grass and what isn’t, that’s the officials’ call. Our job is to try and get him down and that’s a tough job. He’s good and he’s strong in there.”


You can check out Coach Belichick’s entire press conference, including some very complimentary comments about Dick LeBeau, here.

Looking ahead to this Saturday…

NFL Network will present a profile of Steelers DE Aaron Smith and the Annual Mud Football Championship in New England this Saturday, November 13th. The show airs at 12:00 p.m. and again at 4:00 p.m.

You can check out the NFLN schedule here. 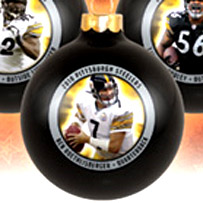 A collection of 2010 Pittsburgh Steelers player ornaments are now on sale at participating Giant Eagle and GetGo locations in Pittsburgh. Each ornament has the Steelers logo on one side and a player image on the other.

There are six ornaments in the collection with the following players images: Ben Roethlisberger, Heath Miller, Troy Polamalu, Hines Ward, James Harrison, and LaMarr Woodley. One ornament is available each week until Christmas. Ben’s ornament is available from November 28th through December 4th.

The ornaments are $9.99 each. You can pick up a copy of the Pittsburgh Post-Gazette each week through Christmas for a $5.00 off coupon on every ornament.