“I’ve got to take care of the ball. Heath was wide open, I just kind of ‘babied’ it instead of putting the throw on him and almost gave it away. But the defense held strong.” — Ben to ESPN’s Suzy Kolber after the game.


From the Pittsburgh Tribune-Review‘s John Harris: 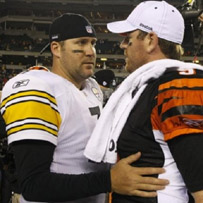 To their credit, the Steelers — beat-up offensive line and all — remained committed to the run even when it wasn’t working last night. Quarterback Ben Roethlisberger hung in the pocket and made tough throws.

From the Pittsburgh Post-Gazette‘s Ron Cook:

The Steelers’ linemen routinely take significant and often unwarranted abuse for their alleged shortcomings. When the team wins, it’s despite them. When it loses, it’s because of them. That’s a tough way to go through your professional life, isn’t it?

The highlight of the second half was Randle El’s 39-yard touchdown to Wallace, who caught five passes for 110 yards. Randle El took a handoff from Roethlisberger, who threw a block, and Randle El hit Wallace in the end zone.

“You have to give Ben props for that block,” Randle El said.

Big Ben turned some sure losses into conversions and threw a nice block on Antwaan Randle El’s touchdown pass (it came on a trick play), but wasn’t needed to make any big plays.

From ESPN’s James Walker, from his AFC North Blog:

Pittsburgh’s defense stepped up in the clutch and the Bengals folded on their final drive in the Steelers’ 27-21 victory. After leading by 20 points, Pittsburgh avoided the largest fourth-quarter collapse in team history to improve to 6-2.

As Starks got dressed before exiting the visiting locker room, I mentioned that it looks like it will be the Ravens and Steelers battling for a division title in the second half of the season.

“Yup,” Starks said with a smile. “Things are back to normal in the AFC North.”

The Steelers’ final story is yet to be told. They are moving on to bigger and better things, which includes another postseason run and a chance at another title.

You can read his blog here.

Other Quotes of Note:

“As always. They’re so good, so much fun to watch. I told them, ‘That’s my fault for the pick. It made it close, and I shouldn’t have let it happen.’ But they bailed me out.” — Ben on the Steelers Defense (AP/Beaver County Times).


“That was the ‘tie the shoe’ block (laughs) – I acted like I’m going to tie my shoe and just get in the way. I just lay on the ground and look and see Mike Wallace make the play, and you know Antwaan is going to put it there.” — Ben to ESPN’s Suzy Kolber talking about the Randle El to Wallace touchdown.


“He is barn-strong! You can’t get him down. There is no one better in the league at extending a play.” — ESPN Monday Night Football color commentator John Gruden, discussing Ben’s play during the third quarter.


“He reminds me of another #7, John Elway “— ESPN Monday Night Football analyst and former NFL player Matt Millen discussing Ben prior to the game.


You can see a video highlight of the Randle El to Wallace touchdown here.

You can watch other game highlights here.

You can see video from Ben’s post-game field interview here.

Ben completed 17-of-27 passes for 163 yards with one touchdown and one interception. 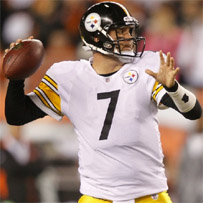 Ben has the second best record as a starting quarterback in divisional games (since the merger), behind only the Patriots Tom Brady –


Only two quarterbacks have more wins than Ben in their first 90 starts (since the merger) – Tom Brady and Ken Stabler. Ben is tied at the moment with Jim McMahon –