Home/News/Luck O’ the Irish
Previous Next

Both of our fan stories this week come all the way from the Emerald Isle, where Ben and his friends enjoyed a golf vacation in June of 2012. And both gentlemen said they felt very lucky to have met Pittsburgh’s Big Ben during his trip to their beautiful country.


James Hurley, a big NFL fan, just recently found the website’s Twitter page, and shared this photo to thank Ben for stopping by the pub where he works: 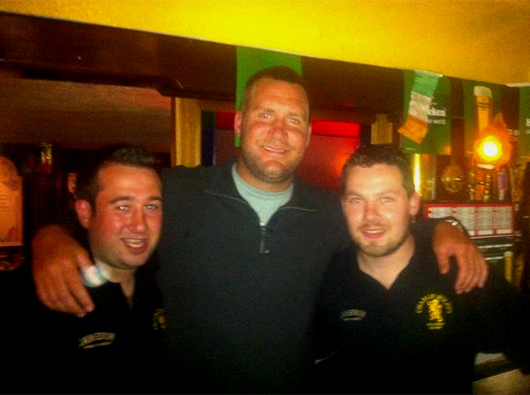 “I was quite shocked when he came in as I have one of his jerseys at home, but I couldn’t go home to get it signed because I was working. Thank you so much! We have the picture framed in the bar and it is a real hit with all the Americans who visit us. Just a pity we couldn’t get it signed, that would have been magical!” — James Hurley

“What a gentle giant! [Came in] to the pub and couldn’t be nicer. We have his picture on our wall, he is our adopted hero! We wish him the luck of the Irish!”

Ben also found a fan on one of Ireland’s most beautiful golf courses!

Old Head Golf Links is located in County Cork on the Southwest Coast of Ireland: 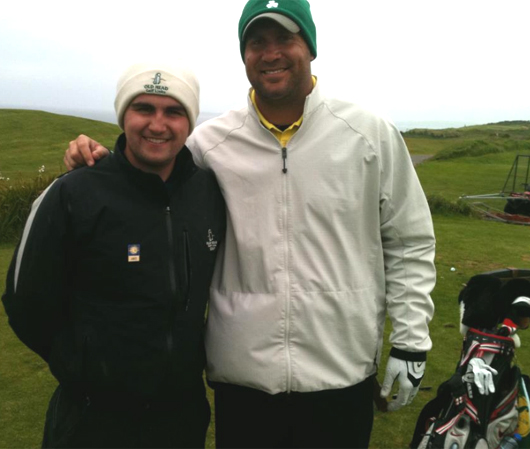 June, 2012: Ben poses with James Cullinane on a chilly day on the course.

I had the pleasure of meeting Ben last summer in Ireland at the Old Head Golf Links. As a huge supporter of the NFL I was awestruck when I saw him and it made my summer! — James Cullinane

Thank you to James Hurley and James Cullinane for sharing their photos and stories!

You can check out more fan stories and photos, including a few from Ben’s trip to Ireland and Scotland here (the photos and stories from his trip begin on page 6, bottom row).