“When they called and told me, it was an awesome honor. I am really proud to have graduated. People were laughing because my jersey was already retired. But to be in the Hall of Fame with the people there, it’s a super year. I think it speaks highly of Miami as a university to honor me at the same time of graduation. I think that speaks on how important they think of academics.” — Ben, during his graduation week from MU (photo below).

On Saturday, February 9th, Miami will honor six outstanding individuals with their induction into the Miami University Athletics Hall of Fame. 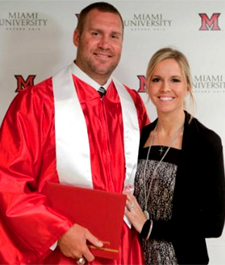 One of those being inducted is Big Ben.

Ben was also a three-time All-MAC selection, earning first-team honors in 2003 and second-team recognition in 2001 and 2002. A three-year letter winner, he forewent his final season of eligibility to enter the 2004 NFL Draft. Miami retired his jersey No. 7 in 2007.

But what makes the induction really special for Ben – he will be inducted in the same class as his college coach, the late Terry Hoeppner, who passed away in June, 2007 of brain cancer. Miami had a winning season in each of Hoeppner’s six years as the school’s head coach (1999-2004).


“Going in with him, it doesn’t get any better than that. It’s an honor to get in. But I owe so much to him, for my career, my life, and who I am as a person. A lot of it is because of him. I have always said he was like a father to me. He would be one of my best friends today. I still think about him a lot. To go in with him, it doesn’t get any more special than that.” — Ben.

The members of the Hall of Fame Class of 2012-13 will be honored during the mens basketball game versus Akron earlier in the day on Saturday. Later that evening, an induction dinner will be held at the Shriver Center Multipurpose Room at 7 p.m.

Tickets for the dinner are currently sold out. However, the ticket office suggests that those still interested in attending should call the Miami Athletics Ticket Office at 513-529-4295 mid-week as more tickets may become available, depending on demand. No walk up tickets will be available.