If you have a Big Ben (or one of his teammates like Troy or DaBeard) going out for Halloween, or attending a costume party this year, and you’d like to send us their photo, we’d love to post it in Ben’s Steelers Halloween Album. 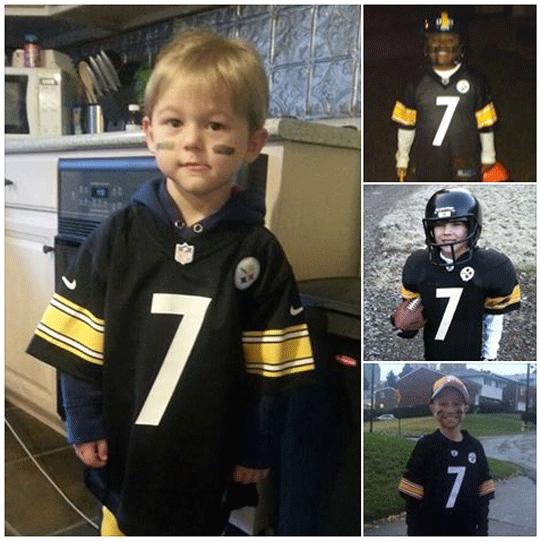 Left: Justin Husar told his mom, Amber, that he wanted to dress up as his favorite Super Hero, Big Ben! Top right: Jovan Ortiz headed out for some Halloween fun in his Virginia neighborhood. Not only does he wear his Big Ben uniform to Trick or Treat, but dad Jonathan says he wears it while watching Steelers games too! Middle right: Waylon Flowers is a Big Ben fan from the Washington State who practices every day and really loves to watch the Steelers every Sunday on NFL Sunday Ticket. Bottom right: Brandon Crusan’s son made it simple for his dad Brian when he was asked to choose a Halloween costume: Big Ben!


Did we mention grown-ups are welcome? 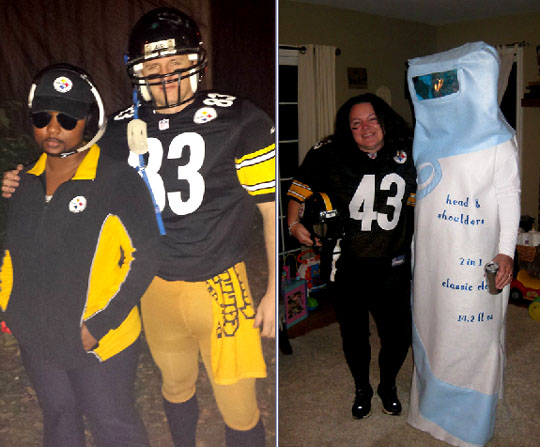 Left: Cynthia Filmore as Coach Tomlin and her boyfriend, Michael, as the best TE in the business! Right: Michelle Stiehler as Troy, and her husband, Al, as the EXTRA-LARGE bottle of Head & Shoulders shampoo!


Have a furry Trick-or-Treater headin’ out to scare up some ghosts and goblins? 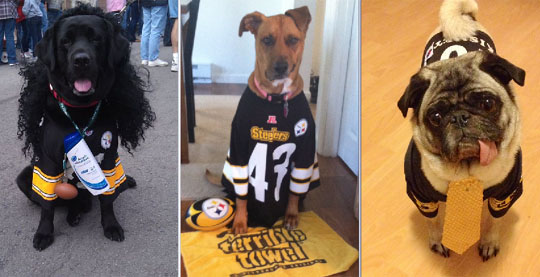 Left: Duce, named after the Steelers’ Duce Staley, wants to know if any of the humans in his neighborhood are handing out cats on Halloween? If so, he’s going to need a bigger Trick or Treat bag! Middle: Emma waits at the door in her #43 jersey for the night’s Trick or Treaters. Right: Kismet is going the “formal costume route” – wearing a gold tie with the uniform in hopes of getting a big haul to hide in the backyard! 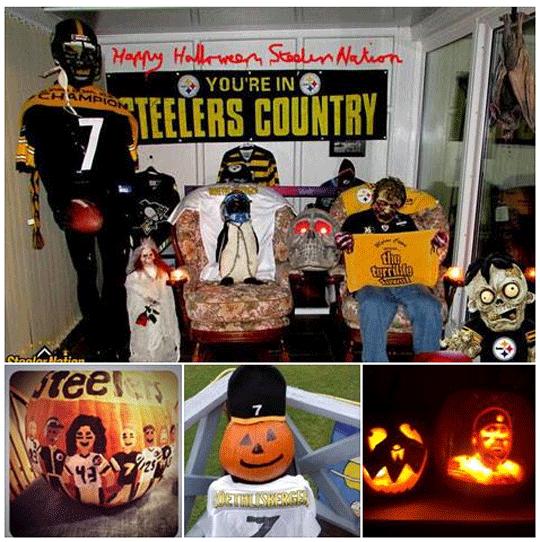 Top: Steelers UK fan Gordon Dedman (yes, that’s actually his last name) turns his Steelers Man Cave into a ghoulish place to watch a game! Bottom left: We respectfully disagreed with Amanda Marie Doerr when she said she wasn’t an artist when she painted her pumpkin free-hand with her favorite Steelers! Bottom middle: Jennifer Hixon thinks her Big Ben Pumpkin Scarecrow is the perfect way to keep those pesky ravens out of her yard! Bottom right: Big Ben lights up the night on Halloween in front of Carly Krysak’s house!

Send your photo(s) via email to: bigben7website@gmail.com and we’ll post ’em in Ben’s Halloween Album!

The Roethlisbergers get into the Halloween spirit too:

In fact, they captured a crazy little monkey in their house that escaped from the Pittsburgh Zoo last Halloween, and sent in his photos before zoo authorities came to get him!