…is the wise way to say “Merry Christmas” to the Steelers – by sending them to sunny Hawaii for the 2012 Pro Bowl!

There is just one week left! 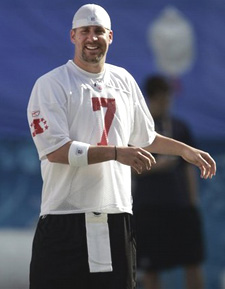 Pro Bowl voting ends Monday, December 19th at the conclusion of Monday Night Football (Pittsburgh Steelers at San Francisco 49ers, 8:30 p.m.) so get those last votes in and make them count!!

Being selected as a starter in the Pro Bowl is a huge honor for players! Let’s show our team how much we support their selection – vote early, vote often! Make Hawaii Black & Gold!

And if they end up making Indianapolis Black & Gold instead, at least they’ll have earned the right to be called “Pro Bowlers” at the same time!!!

Ben has passed for 3,526 yards with 21 touchdowns and a quarterback rating of 95.6 rating so far this season! He is currently No. 2 in fan voting for AFC  behind the Patriots’ Tom Brady. The Bills’ Ryan Fitzpatrick is third in AFC quarterback voting, and the Broncos’ Tim Tebow is fourth.

*”Mele Kalikimaka” means “Merry Christmas” and the title of a Hawaiian-themed Christmas song written by Robert Alex Anderson in 1949. It is a classic that was made famous in 1950 by Bing Crosby, and again in the 1989 movie, “Christmas Vacation” starring Chevy Chase.

Coach Tomlin told the media today that both Ben and Maurkice Pouncey as “questionable” for Monday night’s game in San Francisco. “They’ve worked tirelessly to get back into playing shape,” Tomlin said. “I think you need to characterize their availability as questionable at this point. We’ll see where the week takes us.”