Pouncey: Count ’em both in

Home/News/Pouncey: Count ’em both in
Previous Next

Pouncey: Count ’em both in

“Me knowing Ben he’ll be out there competing and fighting his tail off to be out there.” — Hines Ward.

From the Pittsburgh Tribune-Review‘s Scott Brown this afternoon: 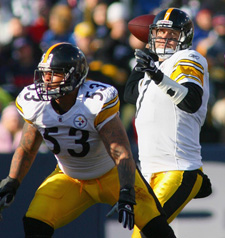 That is what Pouncey said following the Steelers’ first practice since a 14-3 win over the Browns last Thursday night.

Roethlisberger, who has a walking boot on his left foot, was at Steelers’ headquarters today but he did not attend practice. Pouncey had been in a walking boot, but he said today that his left ankle has progressed to the point that he doesn’t need the extra protection.