The six newest members of the Hall of Fame Class of 2012-13 were honored this afternoon during the mens basketball game versus Akron. Among the six was our own Big Ben.

Ben was an ESPNU on-air guest during the game just before the halftime ceremony took place. A few of the highlights from his interview: 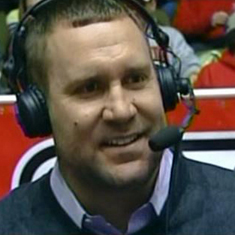 First things first, is he getting any sleep with a new baby in the house?

It hasn’t been too bad…sleepless nights for her, for sure. I help out as much as I can, but it’s really a neat thing to be a father. It’s awesome!!

It’s an awesome honor to be able to come back. I’ve been blessed to have my number retired, I graduated this last summer, and now to go into the Hall of Fame, it’s really a neat thing to do, and it’s even better to go in with Coach Hep! I know he’s not here physically, but he’s here in spirit and it doesn’t get any better than to go in with a guy who was a mentor to me and one of the main reasons I came to this school.

I’ve actually been able to develop a good relationship with him – talking to him quite a bit, just encouraging him. I know what he’s going through, I know how hard it is, how hectic it is. I’m just being supportive and telling him, ‘it will get easier, I promise’ (smiles). This is a tough time right now getting ready for the Draft and the things that he’s got to go through. Great player. I was really excited for him to break my records, and it’s just neat to see someone like that – a good guy do it.


On whether he watched the NFL playoffs –

You don’t watch much of the playoffs if you’re not in it! Not making the playoffs is tough, but it gives us something to build on, and adds a little fuel to the fire for next year, and it kind of motivates you.


Who would you like to see coming back next season for the Steelers?

Everybody. I mean you never want to lose anybody, and unfortunately it is a business and you are going to lose guys, but if we can get as many guys back as possible…we will have some news guys coming in, but the Steelers are a family and we’ll be ready to roll. 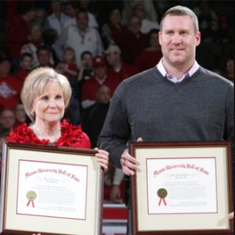 On the best part of being a father –

Just seeing him grow every day, seeing his smiles…he’s here, he has his Miami outfit on, we’re getting him ready!

To me it’s just awesome [being a father].


Do you want him to be a football player?

Whatever he wants to be!

On returning to Oxford –

It’s fun to be able to come back. I don’t get to come back as often as I want to, but when I do it’s neat to see all the changes around the campus, the new buildings. We have a lot of MAC guys on our team so there’s always friendly wagers going around. I always make sure to tell Cach Treadwell, ‘Listen, there are certain games you need to make sure that we win so I don’t have to hold up Central Michigan jerseys!’


Later this evening, an Induction Dinner will be held at a sold-out Shriver Center Multipurpose Room.


You can see a few photos from this weekend’s festivities here.

You can also watch a video here.