“I’m honored to be a graduate, to have my number retired, to be in the Hall of Fame now and to say that I went to Miami. People all the time ask, why Miami? And I say obviously the academics and a chance to play early and Coach Hoeppner.” — Ben 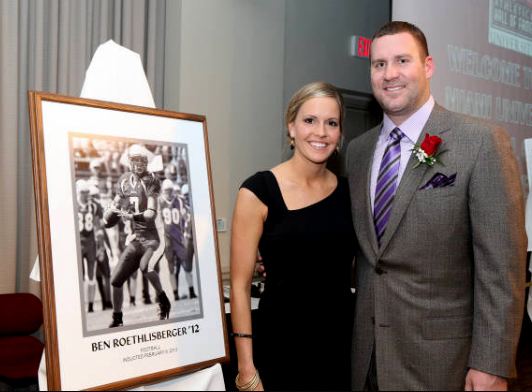 From Rick Cassano, who covered the event for Miami University sports:

“I know he is here in spirit with us,” Roethlisberger said. “Going in with Coach Hep, it couldn’t get any better.”

Miami University introduced its 2013 Hall of Fame class during the men’s basketball game against Akron at Millett Hall, and Roethlisberger — a two-time Super Bowl-winning quarterback with the Pittsburgh Steelers — said he was thrilled to enter the Hall with the late Hoeppner, who recruited and coached him at MU.

“This was one of the first schools, if not the first, to offer me a scholarship. Coach Hep took a chance on me, a kid that never played quarterback until his senior year of high school. That’s why I love this school and Coach Hep so much. They gave me a chance to prove what I was capable of doing.”

Of the bachelor’s degree in education that he picked up last May, the 30-year-old Findlay High School graduate said it was something he always hoped to obtain.

“It was a bigger goal early on, and then as you start getting sidetracked, off-seasons get shorter and things are going on,” Roethlisberger said. “Having a son on the way — and now he’s here — it just kind of motivated me further to get it done and just to tell my son and hopefully more kids that I got my degree and how important education is.”


You can read more from Mr. Cassano column here.

You can see photos from the weekend’s events here.


*Thank you to Miami University!