Home/News/Mini Camp: Ben likes what he sees
Previous Next 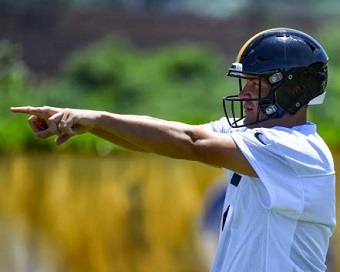 The final leg of the Steelers offseason is underway with the team’s mandatory minicamp beginning on Tuesday at the UPMC Rooney Sports Complex.

It’s the final warmup before the team has a five week break before reporting to training camp at Saint Vincent College, something that is already on the mind of Ben Roethlisberger.

“We’re just going to keep the train rolling,” said Roethlisberger. “Latrobe will be here before we know. It’s a more normal schedule now. It does feel a little more like the regular season.”

Minicamp is basically an extension of OTAs, the main difference being the daily schedule as Roethlisberger mentioned. What it does provide is more opportunities for the offense to work together, and Roethlisberger to get comfortable with the receivers he will be throwing to. One of those he is quickly building a rapport with is Donte Moncrief, who signed with the team as a free agent this offseason and is a player Roethlisberger pinpointed when asked who has made a mark this offseason.

“I’d probably go with Donte Moncrief just because it’s new,” said Roethlisberger. “I kind of know what to expect from some of the other guys. I wasn’t really sure what to expect when he came in. I didn’t know him and now just getting to see his work ethic, the type of person he is, his desire to be great, his knowledge of the offense already. We’ll do no-huddle stuff and I’ll give him a signal and I’ll be like, ‘You good?’ and he’ll be like, ‘Yeah.’ He is in with coach (Darryl) Drake every single morning, pretty much all day.

“You see a desire and the want to be great. I’ve really enjoyed to opportunity to know him and to work with him so far. This is an awesome opportunity that he’s here and we’re getting to work together. He was with us when we went on our trip. It’s just, it’s been fun to get to know him as a person too.”

Moncrief is part of a group of weapons that Roethlisberger has at his disposal that includes JuJu Smith-Schuster, James Washington, Eli Rogers, Ryan Switzer, Diontae Johnson, Vance McDonald and a trio of running backs in James Conner, Jaylen Samuels and Benny Snell.

“It’s an awesome challenge for all of us to get to know each other, to learn, to do everything we can to be the best. That is what we are trying to do to win a championship. In order to do that we are all going to have to be our best.”


You can read more from Ms. Varley and watch video from Ben’s interview with the media today here.