MMQB: Andy Benoit spent time with Ben Roethlisberger to learn how he’s evolved as a QB

Home/News/MMQB: Andy Benoit spent time with Ben Roethlisberger to learn how he’s evolved as a QB
Previous Next

MMQB: Andy Benoit spent time with Ben Roethlisberger to learn how he’s evolved as a QB

“Ben Roethlisberger is the only player of his era to dominate as both a sandlot-style playmaker and a cerebral field general.” — Andy Benoit. 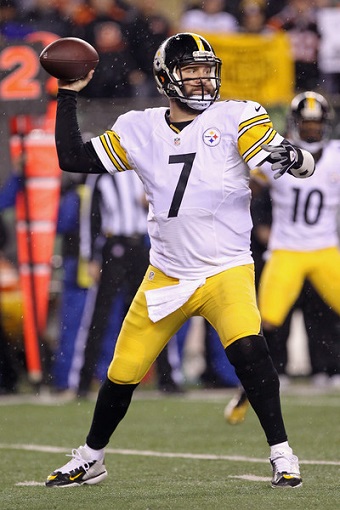 For the longest time, Roethlisberger’s greatness stemmed solely from the fact that he was the most physically gifted passer in the game. People marveled at the way he would shed would-be sackers and extend plays.

Football insiders really marveled at how, after shedding those tacklers and extending the play, he would still make such accurate downfield throws (usually doing so while off-balance).

Roethlisberger’s arm is as strong anyone’s. His precision accuracy is better than almost everyone’s. The fact that he can exhibit all this when things break down is breathtaking.

For a long time, Roethlisberger himself was often the reason things broke down in the first place. “Early on it was, Okay who’s my No. 1 receiver, who’s my No. 2 and that’s about all you had room for,” Roethlisberger told me when I visited the Steelers’ training camp this month. “It was: take the snap, if it’s there, get rid of it. If it’s not, make a play.”

Despite a long history of injuries, Roethlisberger hasn’t lost his playmaking magic at 34. But his game no longer relies on it. And that’s why he’s a markedly better QB now than he was in his 20’s.

“As I’ve evolved I’ve been able to recognize and read defenses, change a play if necessary,” Roethlisberger says. “I’ve gotten comfortable enough in this offense that it even gets down to, Okay, I’m looking at this safety. What’s he doing? What are his eyes telling me? I think that’s just the comfort level with our offense that I can afford to do that.”

Reading not just a safety’s positioning, but something as detailed as his eyes, is one element of 500-level quarterbacking. Another is manipulating a safety with your own eyes—or with your body language as a passer. Roethlisberger has become very adroit here, controlling defenders with his vision, with little rolls of the shoulder, subtle tilts of the helmet and, of course, various forms of his patented pump-faking.

“I think when I was doing the pump fakes early in my career, it was an attempt to throw the ball,” he says with a laugh. “The throw’s not there, so it turns out looking like a great pump fake. But as you get older, as you understand defenses and your offense, you utilize it [as a weapon]. I want to continue to get better [with all of these physical passing nuances], so I watch Tom and Drew and Aaron and some of those guys to see, Okay what’s something little they do that maybe I can do with my game? That’s how you’re always improving.” 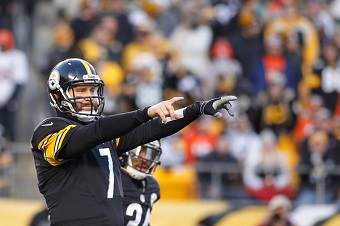 Like Brady and Brees, Roethlisberger’s command both pre- and post-snap has led to an influx in empty backfield formations for his offense. You frequently see the Steelers spread into a 3×2 set with nobody but the QB in the backfield.

“Usually it reveals defenses easier, it’s harder for them to disguise a blitz because they’ve got to cover people, so they’ve got to spread out. We do enjoy it because we feel we can go up-tempo with it and keep it moving fast. We can take our shots but also get the ball out quick.”

He’s the only player of his era to be independently dominant as both a raw sandlot-style playmaker and as a controlling field general.

“You have to evolve with the times,” he says. “The longer you’re around, you find little tricks of the trade. Whether it’s in meetings, or even just impromptu meetings on the field. Or spending time with the backup quarterbacks that I’ve had. I’ve been very blessed with some great guys like that. I think all those things combined really helped me become more of a cerebral type quarterback.”


You can read more articles at MMBQ here.