Ben: ‘I’d like to get out there and play’

Home/News/Ben: ‘I’d like to get out there and play’
Previous Next

Ben: ‘I’d like to get out there and play’

From his interview at Steelers.com: 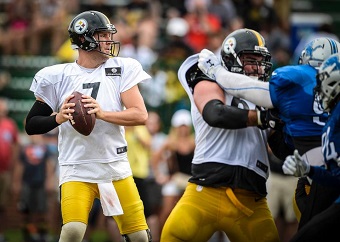 Quarterback Ben Roethlisberger hasn’t seen any action in the preseason yet, but he wouldn’t object to getting some playing time before the regular season rolls around.

“I’d like to get out there and play a little bit,” said Roethlisberger. “It’s fun to go against different uniforms. I remember the couple days of practice against the Lions. You get a little bit of butterflies in the belly seeing another uniform across from you.”

Roethlisberger added that he thinks he would still be prepared for the regular season opener against the Washington Redskins if Coach Mike Tomlin sat him the final two preseason games, but he would still welcome playing.

“I feel like I could go into the first regular season game and do it, but I’d like to be out there just because it’s a different speed,” said Roethlisberger. “You want to get out there. I know my line doesn’t want it, but I wouldn’t even mind getting hit once. Maybe after the ball is gone just a little tap from a defensive guy.”

One advantage of seeing playing time would get some chemistry with some of the younger wide receivers, including Eli Rogers who is battling for a spot.

“Hopefully it’s good for all of us,” said Roethlisberger. “For me to understand them and for them to understand me. How I work. Some the new guys who haven’t been on the field with me or haven’t been around to know how I communicate, how I play. Even for the linemen just to get back out there with everybody.”

Roethlisberger also weighed in on running back Le’Veon Bell, who will be suspended for the first three games of the regular season, as well as other topics of which more will still come –

On not having Bell the first three games:

“Good news is we’ve done it before. We’ve had DeAngelo (Williams) out there and we know what we get from him. Happy he is here and excited we’ve got a player like him to be out there for the first couple of games Le’Veon won’t be out there.”


On his reaction to Bell’s suspension:


On practice against card defenses and how that changes at this point:


On possibly running five-receiver sets due to the tight end uncertainty:

“I think they try and take their cue from the best in the game. Antonio Brown is always out there working, and he’s taking every rep. You tell him to get out and he doesn’t want to get out. I think with his work ethic, the rest of the guys see it, so they bust their butt to be out there. Guys are just understanding the offense better and better, hand signals, looks, things like that. That’s why I say to be out there this next game, to kind of start doing some of those things in live action would be really good for us.”


On taking every rep during Saturday’s practice:

“We kind of had a plan this training camp, day one, half-day off. I think it has been really good for me. It has made me feel really healthy for days like Saturday. Hopefully we will have some guys out there today to help me not take all the reps. But when the season comes, I take every rep, every day anyway. So I might just be starting that a little early than usual.”


On working a lot with Markus Wheaton at camp:

“We haven’t had a lot [of work] because he has been out. Disappointed that he was out of the practices, because I felt like we had really grown a lot and the chemistry had grown a lot. Even if it’s just because his locker is next to mine, communicating as we are next to each other and talking. he spent so much time in the training room that he couldn’t be next to me to talk about things. It was frustrating and disappointing because he wasn’t out there. But he’s out there now, and he is busting his butt to be out there.”


On Wheaton’s next step:


On approaching your work with Ladarius Green:

“Just be patient. I am still excited about the possibility and the opportunity, and the things that I have seen and heard. I am just hoping he can get healthy and get out there. Like I said, I’ve seen a lot of things from him. I’ve heard a lot of things from other people about him. I am still excited for the opportunity. He is still communicating with me almost on a daily basis. ‘Ben, what do you think about this? What do you want here?’ I think the mental aspect and the mental side of it, he is on top of it.”