“Moore adjusting from Brees to Ben”

Home/News/“Moore adjusting from Brees to Ben”
Previous Next

“Moore adjusting from Brees to Ben”

From Mike Prisuta, Steelers.com this afternoon: 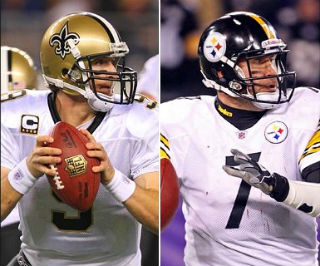 Catching passes was a Brees for Lance Moore during his first eight NFL seasons in New Orleans. But since signing on with the Steelers, it’s a whole new ballgame now that Ben Roethlisberger is launching footballs in Moore’s direction rather than the Saints’ Drew Brees.

“They’re different style quarterbacks,” Moore observed today during a lull at the Steelers’ practice facility. “I would say Ben’s got a little bit stronger arm, maybe a lot stronger arm. Just from a couple of days throwing with him here, that’s something that kind of jumps out at me. If you’re kind of, I call it lazy with your eyes, that ball will zoom right past you.”

Moore’s latest exposure to Roethlisberger is more of a reintroduction. Their paths crossed when Moore played at Toledo and Roethlisberger was at Miami, Ohio.

“I actually played against Ben in college,” Moore said. “The same kind of stuff that he did in college he’s doing now in the NFL, just being able to create time with his legs a little bit and make some of those crazy throws that a lot of quarterbacks aren’t even thinking about making.”