PROGRESS ON BRINGING BEN BACK FOR 2021:

On Feb. 24, Mr. Rooney issued a statement about a meeting he had with Ben Roethlisberger that day during which the player and the team made a commitment to getting something done contractually to allow him to come back for the 2021 season. 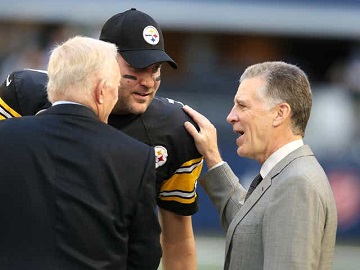 “We have been in communication with Ben throughout the offseason, and we have been clear that we would like him back but we needed to do something with the contract,” said Rooney. “We’re getting to that point now where the time is right. We have a better idea of where the salary cap is going to be, which is an important component of the decision. It just felt like it was time to sit down with Ben and have a good discussion, make sure the lines of communication are open. We had a good, productive discussion, and I assured him we would like to have him back, and he assured me that he wants to come back and play. And so we both left it that we know we have to try to get something worked out on the contract.”

The first day of the new league year for NFL teams is Wednesday, March 17, which is the opening of free agency and also when all teams must be compliant with the 2021 salary cap. That makes March 17 the deadline for the Steelers and Roethlisberger to get something worked out.

“Hopefully we’ll work something out before that,” said Rooney, “but certainly if you want to say there’s a hard deadline, March 17 would be it.”

Rooney also explained that the decision and the work to be done on Roethlisberger has been about his contract and its impact on the team’s salary cap all along. It was not about performance.

“We think Ben played at a high level last year,” said Rooney. “We won our division and set a franchise record for most consecutive wins to open a season, so there was a lot of good stuff. Ben was as disappointed as anybody the way it ended. That last game is just hard to swallow, and I think in part Ben wants to come back and leave on a high note. We’re still confident he has the ability to do that. His arm, I would say, is as strong or almost as strong as ever, so I think he’s certainly capable of getting the job done. Part of the concern is putting a (competitive) team around him, and we had a good discussion about that. We know there are still a lot of pieces to the puzzle that still have to fall into place this season, and we’re hard at work trying to make that happen.”