Home/News/More from today’s game…
Previous Next

Did you catch Ben’s post-game interview?

“It feels good. I believe in those guys up front, and they’ve gone up against some really good defenses, dome good d-lines, some crazy blitzes and different things. I love those guys to death, and I wouldn’t want anyone else in front of me”. — Ben, on his Offensive line keeping him upright.

“He’s getting better each and every week. If this team continues to go down the path it’s going down, he’s going to be discussed as an MVP. To say you’re surprised, no. To say you should be greatly impressed, yes. How could you not be?” — Coach Cowher. 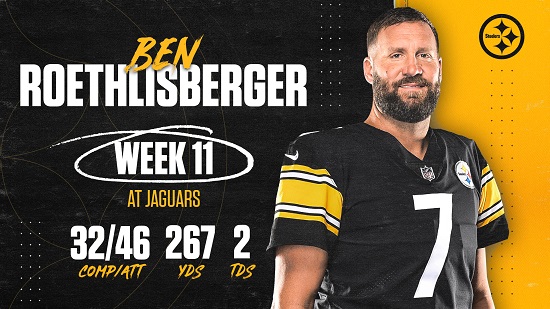 [Ben] has thrown 22 touchdowns, putting him on pace for a career high; been intercepted just four times, which would be his fewest in a decade; and has had a 100-plus passer rating in seven of the nine games in 2020. What’s more, he has surprised everyone — including the doctor who performed his surgery — with how quickly he has bounced back from an injury that could have ended his career. At age 38, he already has exceeded everyone’s expectation.

“I was pretty optimistic he would feel like he could throw with much less pain than he had in a while,” said Dr. Neal ElAttrache, the Los Angeles-based orthopedic surgeon who performed surgery on Roethlisberger. “I didn’t realize how well he would be able to throw.”

There is still one last hurdle to overcome for Roethlisberger, though it’s one he knows may never disappear: He still gets concerned every time he is hit on his elbow.

“I hear people say, ‘Oh man, Ben is holding his elbow again.’ Well of course I am,” Roethlisberger said. “I had major surgery. If my left elbow gets hit, I’m not going to be holding it and be worried about it. I just had potential career-ending surgery on my money-maker, if you will. Every time I land on it or get hit on it, of course I’m going to be scared for a second or nervous for a second.

“People say, ‘Why is [Dr. Jim] Bradley looking at your elbow all the time?’ ” Roethlisberger added, referring to the team’s orthopedic surgeon. “Well, because we all invested a lot in this and we want to make sure it’s OK. When it gets hit, it scares me for a second.”

Still showing why he is one of the greatest to ever do it!