Mr. Stallworth: Ben “is one of the best’

Home/News/Mr. Stallworth: Ben “is one of the best’
Previous Next

Mr. Stallworth: Ben “is one of the best’

Former wide receiver John Stallworth has his finger on the pulse of the Steelers as he has remained close to the team as a part of the Steelers’ ownership group. He keeps tabs on what is happening, and likes what he sees from this year’s team. And the words he had for quarterback Ben Roethlisberger when I caught up with him in Canton, Ohio, we’re Hall of Fame worthy.

Here is what Stallworth said about the 2016 season, Roethlisberger and, of course, the team’s receivers – 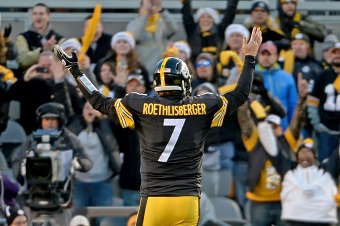 “The sky is the limit. We saw what they did last year when they had people injured and in limited roles. Ben (Roethlisberger) not being Ben because of injuries last year. Then losing running backs and receivers at times and we saw how well they performed. I think they are coming into this season with a world of confidence. I think they are tempering that confidence with experience that says we know we can do this, we know what we can do, but we don’t have to get beyond ourselves. I think they will do well in that role. Offensively they rank as one of the best offenses in the league. They have shown that and I think they will show that this season.”

“He is one of the best at it right now. I have been there in the stadium and seen some of those throws he has made, on the money, at the right place. Had it been any other place position wise it would not have been a completion. He has done that, he has done it in the Super Bowl, in the late, waning moments of the Super Bowl hitting a guy in the corner of the end zone. He is a great quarterback, great timing, great arm, great passion and mind for the game.

“We are here, we are in Canton, and if he quits soon enough and I live long enough, I expect to see him here.”


On Roethlisberger and the Hall of Fame one day:

“You look at the body of work from season to season, the championships he has been involved with. He has what it takes to be here. I fully expect that to be the case.”


You can read the rest, and see video of his interview here.