This story comes from Robert Rangel of Grove City, California.  He and his son Jonathan (photo below) took a cross-country trip to Baltimore on Sunday to watch the Steelers play the Ravens. 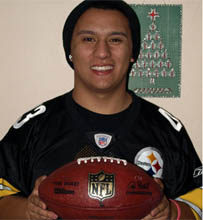 I just want to publicly thank Ben for tossing the game ball to my son Jonathan on Sunday night as he walked off the field in Baltimore.

It was so cold the entire stadium emptied out before Ben left the field except for about six Steeler fans and a bunch of security guys.

We didn’t even know he was still out there. We just wanted to cheer the team after the game. We saw Mike Wallace walking off the field and were just saying things like “Great game!”, when all of a sudden we saw Ben approaching. He looked real tired, and I am sure he was hurting pretty bad. The crowd had been really mean to him all night long, so my son made a point of just yelling things like “Great game!” and “Way to go, Ben!”, and since we were just about alone in the stands next to the tunnel, it was easy for him to see who was yelling.

All I remember was Ben cracking a big smile (broken nose and all) and then tossing Jonathan the ball he had been holding since taking a knee to end the game. We couldn’t believe it. Jonathan, a former HS football player, hugged the ball between both arms like a running back while trying not to drop it as we waded through thousands of Raven fans leaving the stadium. By the time we walked back to our hotel, we saw a post-game video that showed Ben holding the ball while shaking Flacco’s hand and then while being interviewed on the field.

Needless to say, it made our trip from sunny California to freezing cold Baltimore the best father-son trip ever. Last year we traveled to Denver, the two years before to San Diego. Next year, we want to travel to Pittsburgh to see a “home” game.

Ben made a lifetime impression on my son (and me). We didn’t expect it, which made it even more special.

Attached is a photo of Jonathan holding the ball. Not ever going to see this ball on e-Bay or anywhere else. We are going to get a case for it and display it with the tickets and program.

More than that, we will tell and re-tell the story of a great game and a great QB who took the time to make us smile.


*Robert and Jonathan, thank you both for sharing the story and the photo!


You can check out other fan stories here.

Check out Ed Bouchette’s latest column at the Pittsburgh Post-Gazette — some great comments from the Steelers QB!


NFL.com has a video interview with Ben on their site entitled, “Big Ben battles on”. It is from today’s practice.


Steelers.com has more on Ben’s comments after practice today on their site as well as comments from Heath Miller and Hines Ward.