Looking ahead to Sunday’s match-up…

Home/News/Looking ahead to Sunday’s match-up…
Previous Next

Looking ahead to Sunday’s match-up…

“I’m not saying we’re a hot team right now, but we have to win games coming down the stretch. And that’s what we didn’t do last year.” – Ben. 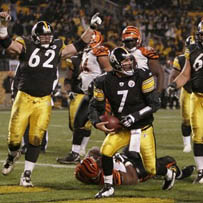 From the Chicago Sun Times today:

Steelers quarterback Ben Roethlisberger is beat up, but that’s when he does some of his best work.


From the Kansas City Star:

The Steelers lead the all-time regular-season series with the Bengals, 48-32, after coming through with the previously-noted 27-21 win at Paul Brown Stadium back in Week 9. Cincinnati took both meetings between the clubs en route to its 2009 AFC North title, however, and completed its first home-and-home sweep of Pittsburgh since 1998 with an 18-12 decision at Heinz Field during Week 10 of last season. The Steelers had bested the Bengals five straight times prior to those two defeats from a year ago, including victories in Pittsburgh in both 2007 and 2008.

In addition to their regular-season advantage, the Steelers also scored a 31-17 road win over the Bengals in the 2005 playoffs.

Bengals head coach Marvin Lewis is 5-11 all-time against the Steelers, for whom he served as a linebackers coach from 2002 through 2005, while Pittsburgh’s Mike Tomlin is 5-2 against both Lewis and Cincinnati as a head coach.


From the Cincinnati Enquirer:


From Bengals coach Marvin Lewis, during his press conference this week:

On Ben’s ability to play through injuries –

“He was hurt last week with the ankle, and he got better as the game went on. The ankle loosened up as he got more movement and so forth. It seemed to be not as much a factor. He seemed to have a slight limp early on, but you saw it (him leading a game-winning drive) later on. Obviously, he had a broken nose and had the surgery to have it corrected, but that’s part of football.”

“He’s an experienced player in the offense. He has a knack for moving away from leverage when the quarterback is on the move and getting the big first-down catch. When it looks like you’ve got him (Ben Roethlisberger) trapped, he moves away and the next thing you know, he’s getting the ball out to Heath Miller or Hines, so those guys do a great job of moving with the quarterback when he’s on the move and extending the series.”


From Bengals quarterback Carson Palmer, during his press conference this week:

You once voiced disdain for the Steelers. Do you still have that feeling?

“Absolutely. Absolutely. It’s a great rivalry within our division. I’m sure they looked more forward to the Ravens game this year because of the way things played out. But to us, it’s a Steelers-Bengals game. They’ve got a good record, we’ve got a bad record. We’re going to go in there and try to spoil what they’ve got going right now.” 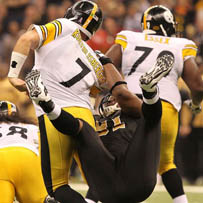 From ESPN’s James Walker, on his AFC North Blog:

I do see evidence that Roethlisberger’s size works against him. Listed at 241 pounds, Roethlisberger is comparable in size to most linebackers and may be the hardest quarterback to bring down after contact. As a result, referees have been slower to throw flags when Roethlisberger is hit.

There were several examples in Sunday’s win over the Baltimore Ravens. The most obvious was the hit across the face from Ravens defensive lineman Haloti Ngata. Although the play looked unintentional, it broke Roethlisberger’s nose and didn’t draw a flag. I’ve seen much softer plays this season to other quarterbacks draw personal fouls.

Last week, the Buffalo Bills twisted Roethlisberger like a pretzel long after the play was over, causing an injury to his foot. Again, no flag. If the NFL wants to go out of its way to protect its players — and specifically quarterbacks — Roethlisberger deserves the same protection and shouldn’t be penalized for his size.

Voting for the 2011 Pro Bowl is still going fast and furious! But neither Ben nor any of his teammates have even broken the top ten!

Eagles quarterback Michael Vick tops the list with 729,838 fan votes. Trailing Vick by nearly 39,000 votes is Colts QB Peyton Manning, with Patriots QB Tom Brady checking in at the third spot. Vikings running back Adrian Peterson and Packers QB Aaron Rodgers round out the rest of the top five.

Come on Steeler Nation, get out and vote HERE!

Quote of the Week:

“Ben is a winner…He is not conventional in the way he plays the game…He will never be slick like Tom Brady or deliberate and mechanical like Peyton Manning…You could never teach a quarterback to play the game like Ben…Ben is brilliant because of the intangibles…The play is never dead when Ben has the ball and is upright.” — FC, from SteelerFury.com