Our Veterans Day Salute is to 99-year old decorated WWII veteran John Hazy, whose story was sent to us by his very proud great-nephew, Mark Francesconi: 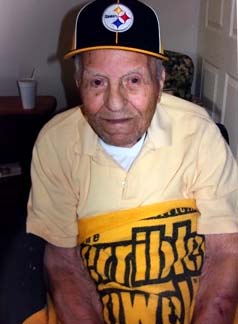 “John Hazy is a lifelong Steeler fan and true American hero whose war experiences are documented in the Library of Congress. John was born in 1918 in Perryopolis, PA and outside of his years of service for our government has resided in Western Pennsylvania all of his life. Now 99 years old, John may be one of the oldest living, most decorated, veteran of World War II and Steelers fan.

John enlisted in the Army Air Corp in 1939 where his training and service led him to Panama, Puerto Rico, and Guatemala. Eventually he was transferred to England where he served as a bombardier for the 368th Bomb Squadron, 306th Bomb Group, in the 8th Air Force.

On April 24, 1944, during a bombing mission over Germany, John’s airplane was shot down. John was one of 9 crew members that parachuted out and survived the crash. Shortly after landing in a German farm field, he was beaten up by farmers, held at gunpoint, and turned over to the German Army before being imprisoned in Stalag XVII-B for thirteen months.

In the Spring of 1945, German Soldiers, fearing the approaching Allies, abandoned their posts at John’s prison camp. Subsequently, John and his fellow prison mates marched for 30 days over Austria before being discovered by General George Patton’s army and officially liberated.

John went on to serve in the Air Force during the cold war from 1946 to 1968 with his last assignment being in the Pentagon. During his 28 years of service John’s highest distinction was the Purple Heart which was recently awarded to him for his injuries sustained during his capture and imprisonment.

We are proud of John, proud of the Steelers, and proud to be Americans.” — Mark.


Mark, thank you for sharing your great-uncle’s incredible story with us! John, you are a true hero! God bless you both and your family on this Veterans Day and always!

And God bless all of our service men & women and their families as well!