“Offseason workouts underway for the Steelers”

Home/News/“Offseason workouts underway for the Steelers”
Previous Next

“Offseason workouts underway for the Steelers”

“I started seven days after our last game, doing cardio five to six days a week. I want to play 16 games and more.” — Ben, during an interview with Mike Prisuta today.

From Teresa Varley this afternoon, Steelers.com: 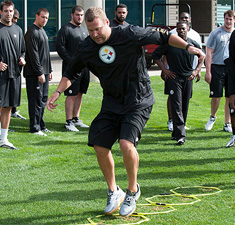 The first regular season game isn’t until September, but football season got underway for many Steelers’ players on Monday with the first day of voluntary workouts.

“It’s great to see so many guys come out, especially after a disappointing year last year,” said defensive end Brett Keisel. “Everyone is here on the first day ready to work and hopefully get back on the winning side of things.”

Among the newcomers at voluntary workouts was quarterback Bruce Gradkowski, a seven-year veteran who signed with the team in March. Monday was an opportunity for him to start building a rapport with his new teammates, including Ben Roethlisberger, and he was happy to finally get his Steelers’ career rolling.

“Ever since I signed I couldn’t wait for this day because this is the start of the 2013 football season,” said Gradkowski. “We’re excited to get it started. Just to see all of the guys here working hard, Ben, the linemen, Keisel. It’s an exciting time.


You can read more from Ms. Varley’s report here.

You can watch video from their first workout here.

You can also read more from Ben’s short interview with Mike Prisuta here.