“Roethlisberger leading the way at workouts”

Home/News/“Roethlisberger leading the way at workouts”
Previous Next

“Roethlisberger leading the way at workouts”

“I wanted to tell them this is the start of the 2013 season. It’s important for us to know if we want to be the best we can be it starts now. I wanted to let them know that I am here to help and support them, and I plan on leading any way I can.” — Ben, on being there for his teammates.

From an interview today with Teresa Varley, at Steelers.com: 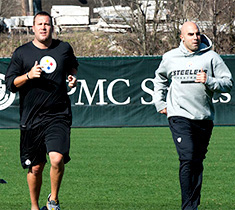 After going through the team’s first voluntary conditioning workouts on Monday, quarterback Ben Roethlisberger signaled for the large turnout of players to gather around him on the field.

While his words couldn’t be heard beyond the tight knit group that formed a circle around him, his actions certainly could. It was a true sign of leadership, Roethlisberger showing that he is not just committed to winning, but to being one of the true veteran leaders on the team.

Roethlisberger doesn’t have to be at the workouts, as they are voluntary and as a veteran he knows what it takes to get ready for when OTAs begin. But for younger players, and even other veterans, seeing him there definitely shines a light on the importance of getting off to a strong start.

“We have had so much change. We lost a lot of veteran guys. I look around and I think there are only five or six guys on this team that are older than me now. It’s important for me as a leader and a quarterback to be here and show guys I am dedicated to this team and this season and am doing what I can to be the best I can be.”

Roethlisberger agrees that change can be good. But he also likes the fact that he will still have some of his receivers in the fold, including Antonio Brown and Emmanuel Sanders.

“It’s going to be big for these guys,” said Roethlisberger. “That is why it’s nice to have Emmanuel back. He is a veteran guy that knows what is going on here and knows the game of football. It’s going to be fun to see them work with some young guys and see what they can do.”