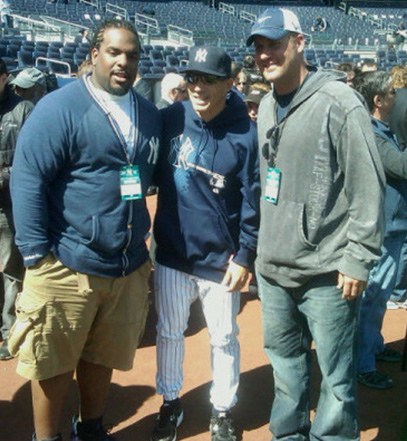 Here they are posing with Yankees skipper Joe Girardi on the field during batting practice.


Ben also sent photos of his view of batting practice…from the field, and of the player introductions.

A towering 6-foot-5 and weighing in at 241 pounds, Ben Roethlisberger stood behind first base watching the Yankees take batting practice hours before the men in pinstripes played their first home game of 2012. The Steelers quarterback and two-time Super Bowl champion had a purpose behind his visit to the Bronx, and it wasn’t just to soak in the morning sun, Yankee tradition or enjoy a hot dog and tasty beverage.

Growing up in Lima, Ohio, Roethlisberger admired Don Mattingly and Jeter, each for their attributes as a players and individuals.

“How do you not watch that guy? He’s such a good player, a good person and a good role model for a lot of people,” Roethlisberger told YESNetwork.com regarding the Yankees captain. “He’s a guy who’s done it for a long time. I think a lot of people, athletes and people in general should model their lives after a guy like that.”

And a little football talk…

Ben Roethlisberger and the Steelers will be coming to MetLife Stadium to take on Eli Manning and the Giants at some point in the upcoming regular season. So what better time to ask Big Ben about Eli and Big Blue that during his Friday pit stop in the Bronx, where he spent the day with Steelers teammate Willie Colon watching the Yankees usher in their home season against the Angels.

“Absolutely I was happy for Eli. That solidifies our draft class a little more,” Roethlisberger told me. “It was awesome to watch him go out and perform. He played great.”

Roethlisberger was at the new Yankee Stadium for the first time at the request of the Bronx-born Colon, the former Hofstra star who was celebrating his birthday. Roethlisberger joked with Derek Jeter about getting into the game – Big Ben was a shortstop in high school – and shared some pleasantries with Yankees manager Joe Girardi before the game.

You can watch the video interview with Ben conducted by Joe Auriemma, of On Yankee Stadium Spotlight.


You can see more photos here.


(*Thank you to the New York Yankees)

“Is Big Ben the best QB drafted in the last 10 years?”

According the NFL.com: Yes.

Around the League ranked them from top to bottom. The core criteria is a mix of career achievement and future potential (for instance, Cam Newton at No. 5? You bet, based on what we’ve seen and what we expect to see).

You’re an NFL general manager. Who do you want leading your team? Here’s our list:


You can read the rest of their list here.