“I love being out here. I love the game. I feel younger than ever.” — Ben 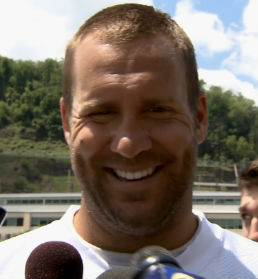 “I think it’s something that we’ve realized what we can be and what we did last year. We’ll use it more. I don’t want to call it our base offense, but I think you’ll see more of it, so I think it was important for us to get in it early and often…We’re not going to score on every series that we go no-huddle.”


What he sees on the offense so far –

We have a lot of speed. That’s running the ball, that’s throwing the ball…whatever it is. I just want us to be fast and I want us to put a lot of points on the board.

His love for the game –

“I’m excited about this team and the direction we’re headed.”

“Congratulations to him and his family and the 49ers franchise. We’re on opposite sides of the coast. I’m over here just worried about being a Steeler and that’s all that matters with me. It’s just about getting better out here with these guys.”


You can watch & listen to his interview here.

From Mark Kaboly at the PittsburghTribune-Review today:

Lance Moore has been working with Ben Roethlisberger on the field for only a couple of weeks, but has been impressed with what he has seen.

“He makes sure that if I have any questions that I come straight to him,” Moore said. “He is an extension of a coach out there, and it is easy to get answers from him.”

“Moore not finished yet”

From Chris Bradford at the Beaver County Times: 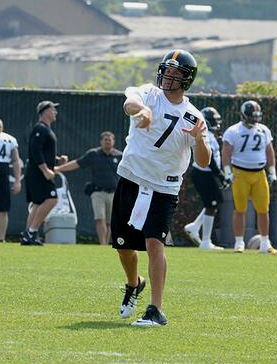 For Moore, the chance to work with Ben Roethlisberger was just an opportunity too good to pass up.

“It’s exciting, you’ve got a guy that’s won two Super Bowls, been to another, it doesn’t get any better than that,” Moore said. “The one thing he knows how to do is throw the ball. It’s exciting to come here and be a receiver and get the opportunity to catch balls from him.”

For the previous eight years, Moore had been catching balls from another Super Bowl winning quarterback with Hall of Fame credentials. In 2009, Drew Brees helped lead Moore and New Orleans to its first Lombardi Trophy.

“Drew’s a guy who’s very cerebral on the field, can beat you with technique,” Moore said. “Ben’s a guy that has all kinds of crazy talent, crazy arm strength, can make every single throw. They’re both great.”

“Wheaton works to win a spot”

From Mike Prisuta at Steelers.com:

His rookie season was derailed by a pinky injury that turned out to be a lot more serious than initially anticipated, one that included multiple fractures and required multiple surgeries to repair. That had a lot to do with Wheaton catching just six passes for 64 yards while appearing in 12 of 16 games.

But that’s not to suggest Wheaton’s rookie season was a waste. In fact, he makes the case that it was beneficial in preparing him to perhaps embrace a much more significant role this time around.

“I learned a lot,” Wheaton insisted. “Coverages, a lot of the adjustments that (quarterback) Ben (Roethlisberger) throws at us. The playbook. Being able to sit out last year, pretty much, helped me, I think.”

So did his locker room address at the Steelers’ practice facility. Wheaton and Roethlisberger were next-door neighbors.

“I was always picking his brain,” Wheaton said. “Any time I have a question, I don’t have to go too far to ask. It makes it easy on me.”

Wheaton and Roethlisberger continued working on the necessary quarterback-wide receiver rapport when they spent a week working out together in California in advance of OTAs.

“I wanted to take the three younger guys out there,” Roethlisberger explained. “Obviously, I offered it to everybody but most importantly it was him, Derek (Moye) and Justin (Brown), just to work with them and get a feel and try to get an early start.”

Now it’s time for Wheaton, among others, to begin showing the Steelers he’s capable of making a big jump in terms of what he’s able to contribute this season.

“He’s a competitor,” Roethlisberger said. “He’s a guy who wants to prove he can be out here and that he can be a starter. I’m excited to see what he can do.”