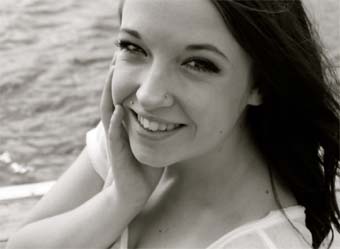 As Christmas was approaching, and the seasons were changing, I was dreading it all and did not want any part of it this year.

You see, in July 2017 my beautiful 20-year old daughter Taylor, was killed in a horrible drunk driving accident. The car hit so hard that it burst into flames. Taylor and another friend could not get out and were killed. At about 8:30 am, two Washington State Police chaplains and the local Sheriff came to notify us of the accident. As soon as I opened the door, the mother instinct hit me, and I knew it was about Taylor. Just like in the movies, I collapsed and my 15-year old son, Carson, came running to my aid. He was so confused and upset that his sister was gone and I was hysterical. He just held me and rocked me, and kept telling me it was going to be ok. It was such a horrible event for all of us, especially for a 15-year old to endure.

Carson has been so strong and brave and honestly, I’m not even sure he has shed a tear yet, or been able to grieve the loss of his sister. We were never able to say goodbye, or see Taylor due to the circumstances of the accident, and I was only able to get a button from her jeans, and a ring from the medical examiner.

Our family has been lost and stuck for the past few months and just completely devastated from our loss. Taylor was so amazing and had so much to offer the world. She was a HUGE supporter of our Military, Veterans, and First Responders. In fact she was a first responder in the making, and was to continue on to nursing school this past September. The amount of people and lives Taylor touched has been overwhelming, and I realized her legacy should live on and continue to touch lives and give back to America’s finest. In her honor I have started the Taylor Strong Project, a foundation that will give back to those that serve our country and protect our freedoms. I know it is what Taylor would have wanted. This was so important to Taylor and part of who she was.

Although The Taylor Strong Project is near and dear to me, it is not the reason I feel the need to share our story. When Carson lost his sister, he also lost his parents in a sense. Understandably, our family is not the same as we once were and Carson deserved to be treated to something special.

For Christmas this year, we decided to do something completely different and something just for our son. We decided to skip the present opening and the typical family gathering as it was just too hard this year without our daughter. So as lifetime, loyal, Steelers fans, we decided to fly into Houston to see our boys earn another win against the Texans on Christmas Day. Although we live in Washington State and are not native to PA, we have always proudly bled “Black and Gold”. We can thank the Steel Curtain and growing up in the 70’s for that. Washington is saturated with Seahawks Fans, and YES, I will admit that I still rub it in about our 2005 Super Bowl win!!! We purchased great field level seats for the Texans game, and were just a few rows back – on the Steelers side.

Carson was beyond excited for the trip; however, I wanted to give him something on Christmas Day. Something just for Carson. Something he deserved and would never forget.

I decided to go out on a limb, and tried for 2 days to search for an email address for anyone who could possibly help me get a message across to anyone within the Steelers organization. Maybe get an autograph, a picture, or maybe just a wave from a player on the field. Honestly, I really didn’t expect a response, especially because every outlet I found clearly stated they do not contact players, coaches, or the Rooney’s and we were not to even ask. Something kept telling me to reach out anyway, and so I did.

Within an hour, to my surprise I received a return email from Erin, the gal that runs Ben’s website and social media pages. To my surprise, she reached out to Burt Lauten, the Director of Communications for the Steelers, and to Ben!!!

I was shocked and about fell out of my chair when I read that they wanted to give Carson a Merry Christmas and that there would be 3 Pre-Game Field passes waiting at Will Call for us in Houston – which meant for 2 hours before the game, we could actually be on the field watching warm ups and practice. I was so excited to give this to my son as a surprise on Christmas Day. 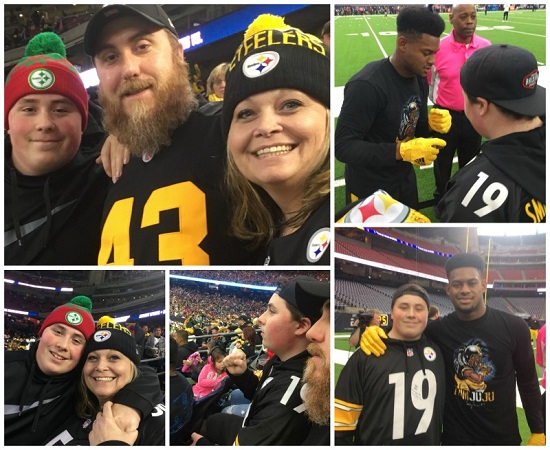 I am living proof that the integrity of the Steelers franchise is truly an organization that cares about their fans, and recognizes the importance of giving back to those in need. In my case, it was giving back to a 15-yr. old boy that was deserving of a Merry Christmas, and they sure did come through…

Carson was absolutely on Cloud Nine with a smile from ear to ear as we walked onto the field on Christmas morning.

Right there, practicing in front of him was JuJu, one of Carson’s favorite players. In fact Carson was wearing JuJu’s jersey and recognized him right away from the Minion cleats he was wearing. He follows these guys’ religiously on social media and had seen a post from JuJu that morning showing off his Christmas Minion cleats. JuJu even came over to sign autographs. Carson had his jersey signed by JuJu and even got a picture with him. Carson says he is NEVER wearing the jersey again and we are framing it to hang in his room.

We were up close and got to see some other favorites of Carson’s like Martavis Bryant, Bell, TJ Watt, Boswell, Jesse James, Gay and Dupree…Carson and his father were so overwhelmed with Steeler Pride and excitement. Although we never got to meet up with our star quarterback Ben, we were so appreciative of the field passes and had nothing to complain about.

We were also greeted by the one and only Burt Lauten, who seriously had the largest bag of goodies for Carson from the Steelers!! For Burt Lauten to personally meet my family on the field and give this to Carson, felt so special to and was just another surprise that was life changing for all of us.

We had the most amazing time on Christmas Day, and a huge part of that day is because of this team. We all had fun and smiles throughout the day, something we had not felt in a long time. We missed Taylor dearly, and of course it was not the same as it would have been with her there. But we all agreed that we felt her soul and spirit join us the game, and that she was smiling from above for her brother. 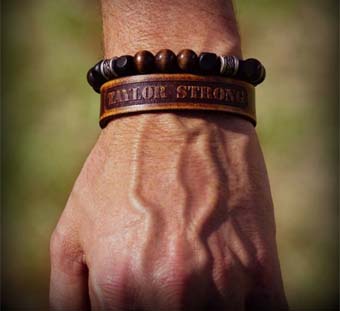 I wanted to share my story as a testament of how impressed I am by the Steelers franchise, especially Burt Lauten and Big Ben. In a sea of millions of fans, they went above and beyond to recognize my son, and helped me give him probably the absolute best Christmas ever.

These guys are the real deal and a true class act. I want to personally thank them for everything and let them know that this was definitely a life changing event for Carson. With the Taylor Strong Project launching in just a few weeks, I will be sending them a Taylor Strong leather cuff as a thank you and promise that we will continue to do great things for our countries finest – First Responders and Veterans. Love and light to you all and I am forever grateful for this amazing opportunity. — A fan for life, Sarah Pyles.