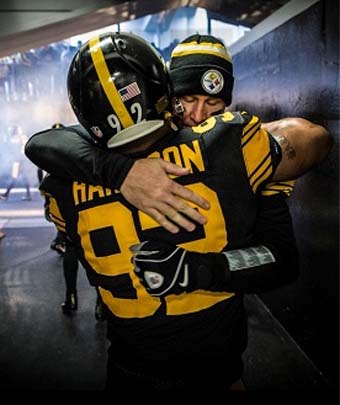 “I love being out here with the guys, kind of like preseason games it’s hard to not play. It’s one of those things where it’s not my call.”


On if he was disappointed with the entire Harrison situation –

“I have been blessed to play with one of the best guys, defensive football players, a friend, for a long time. We’ve played in a lot of games together. The biggest games. He has one of the biggest plays in Super Bowl history. It’s truly been an honor to call him a friend and a teammate. I’ll miss him. I’ve only had to go against him when he was in Cincinnati. It won’t be the same in here without him especially because he was the oldest and now I am the oldest. I count my blessing for all of times I got to share with him.”


On what he will miss most –

“How good of a player he was. He truly is one of the best to play this game at the outside linebacker position. Just really struck fear in quarterback’s eyes and you can see it.”


On his reaction when Harrison signed to the Patriots –

“James has to do what James has to do. It’s not like he called and asked me if he should or not. James was out there and he was a free agent. He’s going to do what he needs to do that is best for his family. I wish him the best. I had a lot of good years with him.”


On if he worries about players sharing information when they leave –

“I think the first time we played Cleveland I think Sammie Coates had just got picked up by them. That was obviously a big concern of ours, knowing our offense. That’s on James, if they want to ask him every single piece of information he has then that’s what this league I guess and other people do that, too. So, I’m not worried about it. We don’t play them this week and we don’t play them next week so we’ll see. My wife and I were talking last night and she asked if he knew much of our no huddle stuff. I don’t think he knows a lot of it. I’m sure he’s heard some of the same things for a lot of years now so maybe some of it but like I said that’s a long way off.”


On the Week 1 game against Cleveland:

“It was a long time ago. It just felt like we never really got into a rhythm offensively. Kind of one of the first times I think we were out there with Le’Veon [Bell] and everybody so it’s a feeling out process early in the season. We kind of played like it. Luckily, we were able to get a win.”


On who got his vote for Steelers MVP –

“Maurkice Pouncey. I was a guy that voted a lot of years for Heath Miller and to me MVP is the Most Valuable Player on this team, a guy that you just cannot do without and to me it’s him. I could probably pick any of the linemen but he’s kind of the anchor of that group and the guy that means a lot to me not just as a friend but for this team. Definitely deserves it in my boat. I put a big 5-3 on my thing, too, and circled it, too.”

“Hopefully a big one. I thought that was really big for him to come out especially out of the gate early catching those balls early and moving us down the field. I would’ve liked to get him the ball a little bit more later but the way the game was unfolding kind of dictated that. It’s good to get him back out there and get him back into the rotation with Jesse [James] and X [Xavier Grimble]. The more weapons the better in the postseason.”